A self-professed “office guy,” Paul Finkbeiner has learned to love apartments for the steady, predictable profits they churn out for his pension fund shareholder base. 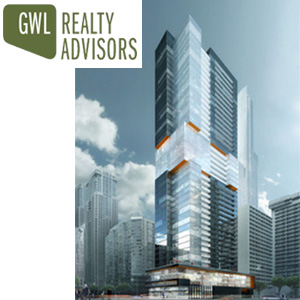 A rendering of the Bay and Gerrard St. apartment building

“A lot of my competitors are only waking up to it the last five years saying, ‘Oh these apartments are really good.’ We have known it for the last 20,” said the president of GWL Realty Advisors Inc., one of the country’s largest real estate organizations with more than $17 billion in assets.

An office executive with Trizec Corp. and Brookfield Properties in the early 1990s, he came to know and love multi-residential when he joined GWL as president in 1995.

“Apartments, when I first looked at them, I couldn’t figure out why people didn’t buy them. This is going back, but there was a three per cent vacancy level. In some cases there was a wait list to get in. So why are we not buying more of these things?

“Since then, the apartment asset class has performed best in my almost 25 years here; it has always outperformed the others.”

The apartment sector, which comprises about 25% of GWL’s asset base with about 15,000 units, has one significant downside.

“You can’t buy a lot of it because a lot of the private guys know how good it is,” said the GWL chief. “We have bought a fair bit, but you need to build it now.”

One of the current “build-it” projects the company is working on is a 594-unit, 43-storey apartment building at Bay and Gerrard Sts. in downtown Toronto. The LEED Silver building will feature one-, two- and three-bedroom apartments, ground-level retail and six levels of underground parking.

“We believe we are going to do extremely well on that property.”

Outside thinking for future multi-res development

Bay and Gerrard is something of a unique opportunity for GWL: it was a rare piece of vacant land in the heart of the country’s largest city. When he looks across his apartment portfolio, Finkbeiner expects much of the company’s future multi-res development will take the form of intensification or densification.

“A lot of the stuff we are trying to do is just look at our existing assets and think outside the box at what they could be,” Finkbeiner said.

Even with the disruption for current tenants, the math works.

“Everybody wins, even though you have to kick people out. You get more units, they are newer and it will be in a well-located place,: he said.

“So we are starting to look at opportunities where we can look at what is there and hold it for a while . . . wait and see, and then you may be converting that into something much bigger than you thought.”

GWL is active in all four property sectors and office makes up the largest component, comprising roughly 50% of the company’s asset base.

Perhaps not surprisingly, Finkbeiner is optimistic about the prospects for the office sector in cities such as Toronto which has been going through a lengthy building boom phase.

“It looks very promising,” he said, referencing a weekly company leasing call that focused on the Toronto office market and identified plenty  of tenant movement.

“I was impressed by the number of prospective tenants looking to move into new space. Almost every bank looks to be out there looking at the possibility of relocating from somewhere into new buildings. So I think this is very supportive of being able to build new stock.

“In general, the Toronto market is strong.”

The market is so strong, in fact, that Cadillac Fairview recently announced it was proceeding with a 32-storey spec office development this summer at 16 York St.

“In my view there is a lot of demand from a number of tenants. I can’t remember all the names but almost every bank (and) a couple of law firms are looking. In addition a lot of firms may be looking to move out of B buildings into new space where they can become smaller.”