A growing population and an improving economy have contributed to a strong apartment market in Halifax over the past few years. 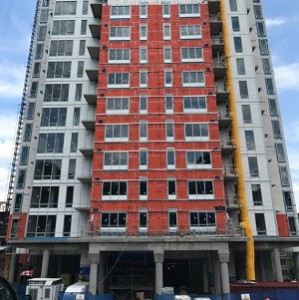 The Alexander is a 240-unit apartment tower under development by Killam REIT in Halifax. (Image courtesy Killam REIT)

“There’s a lot of new construction along the Bedford Highway. It’s suburban type of product aimed more at empty nesters. The new buildings being built in downtown Halifax are more aimed at urban professionals and affluent students.”

The most recent statistics from the Canadian Mortgage and Housing Corporation, published in October 2016, showed the vacancy rate fell to 2.6 per cent from 3.4 per cent in 2015. The average monthly rent for units of all sizes rose by 1.8 per cent to $987.

“We achieved 2.7 per cent rental rate growth in Halifax last year, and a 120-basis point improvement in occupancy for the year. We’re continuing to see strong demand for our Halifax apartments in 2017.”

Killam, which has a $2-billion Canadian portfolio, is the biggest player in the Halifax apartment market. The local REIT owns 5,165 of the 14,282 units it manages across 59 buildings, representing 11 per cent of the city’s primary rental market.

There are a number of family-owned and private companies with significant apartment holdings in the city, the largest of which are Universal Realty Group, Southwest Properties and Hanias Properties. Several major national owners — including CAPREIT (CAR.UN-T), Northview Apartment REIT (NVU.UN-T), Timbercreek Communities and Oxford Properties — own buildings in Halifax.

Capitalization rates have compressed over the past few years and Fraser said new residential buildings in Halifax have a cap rate of around five per cent.

Halifax’s population is expected to continue to grow due to international immigration and a migration from rural areas of Nova Scotia in search of employment opportunities. Irving Shipbuilding‘s $25-billion shipbuilding contract is expected to have positive long-term implications for Halifax and Atlantic Canada.

Large construction projects and steady growth in the service sector are also contributing to the city’s economic growth.

“Additionally, the city’s growing baby boomer population is expected to downsize in the coming years and transition to rental units, further increasing long-term demand for apartments in Halifax,” said Fraser.

An average of 1,245 purpose-built apartment units were completed annually in Halifax between 2012 and 2015. Only 757 units were added last year.

While the amount of rental construction activity shows no signs of slowing, the size of apartment projects under construction has increased. Completions take longer as a result, which puts a damper on supply growth.

The Alexander, other Killam developments

Killam is developing The Alexander, a 240-unit building at 5121 Bishop St. on Halifax’s south end waterfront that’s slated for completion in the first quarter of 2018. Suite sizes range from 568 to 1,450 square feet.

The 21-storey building will be fully integrated with Killam’s Historic Brewery Market and provide residents with a fitness room, boardroom, large landscaped terrace and barbecue area. There will be underground parking for 228 cars and more than 100 bicycles.

Killam also has development land located beside The Alexander for another 50-unit building. The REIT also has an approved development plan in place for 104 units at Spring Garden Terrace, near the corner of Spring Garden Road and Carlton Street, and land supporting a further 270 units in the same area.

Other notable apartment developments underway or recently completed include:

Fraser said the largest apartment property for sale in the area is Oxford’s Highfield Park Apartments at 96 Highfield Dr., across the harbour in neighbouring Dartmouth. That development has approximately 1,300 low-rise suites and includes a fitness centre, convenience store, family playground and picnic area.

“The unit size of the suburban product is quite large while the urban product is generally smaller,” said Lobo. “The suburban buildings are smaller, with 70 to 120 units. The urban stuff has a smaller footprint but goes up 10 or 20 storeys.”

Student housing market in its infancy

While Halifax has six universities and colleges, and a student population of more than 30,000, the purpose-built student housing market is in its infancy. Most students live on campus or rent condominiums, houses and conventional apartments around the city.

“These are old universities in built-up areas, so it’s hard to find dirt, and student housing is still a burgeoning industry,” said Lobo. “But that will change and Halifax will certainly be a market for developers.”

Killam, however, isn’t likely to be among those developers, according to Fraser.

“We have a number of students in our properties near St. Mary’s and Dalhousie universities. We don’t have any plans to focus on student housing.”