Paven Bratch had great success in restoring a 142-year-old building in downtown Hamilton into the popular Radius restaurant and will try to duplicate it with the nearby The Pasadena condominium. 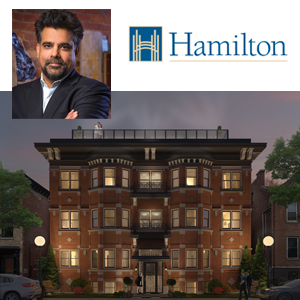 “I know the perils and joys of working on heritage buildings,” said Bratch, a self-described “serial entrepreneur from the marketing and technology world” who has now formally founded a Hamilton-based development firm called Metro Partners.

“There are a lot folks who are interested in investing in real estate in Hamilton that don’t know where to start,” said Bratch, a Hamilton native who’s lived in Toronto and worked around the world.

“Hamilton is a significant metropolis where a lot of opportunities exist. We’re open to partnering with folks, whether they be corporations or real estate investors or others who are interested in taking advantage of it but need someone local to help them on the ground.”

The Pasadena damaged by 2014 fire

The Pasadena was one of Hamilton’s most prestigious apartment buildings when it was built in 1914, but a 2014 fire caused extensive damage. Bratch purchased it under a confidentiality agreement with previous owner CLV Group last year.

“At the time of our acquisition it was in limbo and largely vacant,” said Bratch. “Some work had been done to restore it, but otherwise it was a rough canvas.”

The Pasadena will be located at 27 Bold St. and consist of three storeys and 32 units. There will be one-bedroom and two bedrooms plus den layouts ranging in size from 544 to 791 square feet. Prices will start in the low $300,000s when sales begin in a few weeks with assistance from real estate brokerage firm In2ition. Move-in is slated for early next year.

Bratch was attracted by the “architectural beauty and great bones of the building” and plans to return it to its former elegance while incorporating modern amenities. The Pasadena will include: restored wood and glass front doors; molded plaster beams; a new elevator leading to a rooftop terrace with a lounge, dining area, outdoor culinary centre and washroom; a large skylight above the atrium; and an historic red oak spiral staircase.

“We’re driven by heritage permits that say we have to restore the building’s façade to its former glory,” said Bratch.

The Pasadena will have high-end suites

Award-winning Hamilton-based Lintack Architects designed the interior spaces and Owen Reeves is overseeing the grounds. The renovation costs will be at least $7 million.

The Pasadena is located in the Durand neighbourhood, which has roots going back to 1791. It features quiet tree-lined streets, historic buildings, art galleries, shopping, the nearby Hamilton Farmer’s Market and a growing number of restaurants. It’s a one-minute walk to the Hunter GO train and bus station and two minutes from Hamilton City Hall.

“There are a number of other condo projects in Hamilton at this point in time and it’s obviously a hot market, but I would say that the neighbourhood that we’re fortunate enough to be in is unparalleled,” said Bratch. “It’s the place to be for adults in Hamilton.”

Metro Partners collaborated with the City of Hamilton to secure a five-year municipal tax rebate specific to heritage properties. These tax credits will be passed directly to purchasers and, with the savings also achieved by Metro Partners, it will result in reduced condo fees for The Pasadena residents.

“The City is open for business,” said Bratch, who credited city councillor Jason Farr for going to bat for him in securing the tax credit.

“There’s a reason it’s been issuing more than $1 billion in building permits over the past few years.”

Given Bratch’s technology background, his next project is creating a high-tech centre in Hamilton. A site has been chosen and he said he’s in negotiations to move forward with it.