The population of Ontario’s Durham Region — anchored by Ajax, Pickering, Whitby and Oshawa — grew by 33 per cent between 2004 and 2014 and is becoming home to a lot of Torontonians who can’t afford to buy a house there. 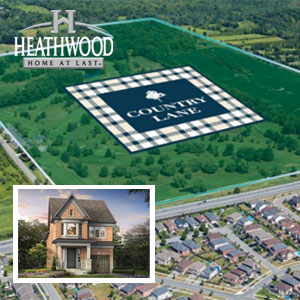 “The demand is there,” said Heathwood Homes president Hugh Heron, who has overseen the construction of tens of thousands of homes in hundreds of Ontario locations over five decades.

“Durham Region is looking very healthy and you’ll see a lot of houses being built there in the next little while.”

Whitby has a lot to offer

Whitby features vibrant commerce, charming neighbourhoods and Lake Ontario shorefront, and has been ranked in the top 10 best places to live in Canada by MoneySense magazine. Heathwood and Andrin Homes are taking advantage of this by teaming up on Country Lane, a new master-planned community which released just under 200 homes for early sale earlier this year and saw them all sell out in a matter of hours.

“We did virtually no marketing whatsoever,” said Heron, adding that about 5,000 people registered interest in Country Lane. “Because of the Internet and social media, everyone’s aware of what’s happening in the GTA.”

Country Lane promises walking trails, bike lanes, a park with soccer pitches, a splash pad and a playground, as well as a proposed school. It’s close to the Heber Down Conservation Area, shopping, restaurants, arts and entertainment venues, sports facilities and a GO station.

“What’s appealing about it is that it’s surrounded by Greenbelt and it’s right on Taunton, which is next door to the 412, which connects to the 407,” said Heron. “Transportation is really good.”

Heathwood has developed a “Green Home Energy Program” that dictates that its new homes perform 15 per cent better than the Ontario Building Code in energy performance. It installs low-flow toilets, faucets and showerheads to conserve water and includes environmentally friendly materials when building. Heron added that Country Lane will feature roughed-in plug-in stations for electric cars and a roughed-in system that can be installed to recover, recycle and reuse grey water in homes.

Lack of land is pushing up prices

While the Pacific Ocean and surrounding mountains have constricted outward expansion in Vancouver, where house prices are outpacing Toronto, Heron said the Greater Toronto Area faces similar issues due to Lake Ontario and being largely ringed in by protected green space, farmland, forests, wetlands and watersheds as part of the Ontario Greenbelt. This makes it difficult to find land to build single family homes.

Heron remains bullish on Durham Region as he envisions a new airport in the area and more jobs being created, which will prompt more people to take advantage of existing and future infrastructure and move to places like Pickering, Ajax, Whitby and Oshawa.

Although house prices are creeping up in those cities, Heron believes that a $1-million house in them would probably cost close to three times that price in many parts of Toronto.

Heron said Heathwood has eventual plans for a small infill development at Yonge and Finch in North York for townhouses and residential units up to six storeys, but he doesn’t know when that will come to market. There’s also land in Brampton that the company plans to develop farther down the road.