Hillcrest in Richmond Hill, Ont. continues to add new retailers as part of $90 million in renovations which have been ongoing at the shopping centre since 2015. 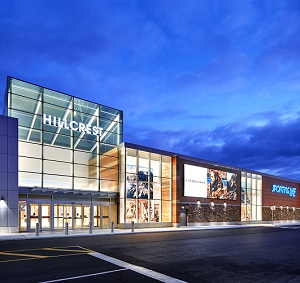 “We were looking at bringing new life to the property,” said Hillcrest general manager Ryan Da Silva of the mall, which was built by Cadillac Fairview in 1974 and purchased by Oxford Properties Group and Montez Holdings Inc. in 2011.

The first move, in 2015, was consolidating two separate Hudson’s Bay stores into one and expanding its footprint. That was followed in 2016 by a renovation of Hillcrest’s south wing, which was completed with the recent opening of West Coast Kids to join Sporting Life, H&M, Pandora and Starbucks.

Hillcrest, located on a 46-acre site at 9350 Yonge St. at Carrville Road, will welcome Honey and Swarovski this summer.

HomeSense/Marshalls, Indigo and Old Navy are also set to open inside Hillcrest’s much anticipated north wing, a reconfiguration of the 133,000-square-foot former Target store which closed in April 2015. The wing will open this fall, with an entrance which will mirror that of the existing south wing.

Hillcrest has a gross leaseable area of 503,587 square feet, anchored by Hudson’s Bay’s 136,915-square-foot store. It has more than 110 stores and services and 2,631 parking stalls. It’s managed by Hillcrest Mall Management Inc.

Hillcrest has introduced more than 20 additional retailers over the past three years, including Sleep Country, Aritzia and Sunglass Hut.

Interest from brands is increasing due to: weekly traffic of 97,000 people; 47 per cent of household incomes in the mall’s primary trade area being higher than $100,000 per year; and a median age of 39.8 for residents in Richmond Hill.

The population is also growing.

“Within a three-kilometre radius, we’re looking at over 6,500 condos and townhomes being developed over the next few years,” said Da Silva.

All this has led to rising sales. Hillcrest’s sales are up eight per cent on a 12-month rolling basis and are now at $565 per square foot.

Da Silva said Hillcrest’s occupancy rate is moving toward 90 per cent and will pass that figure once the north wing is completed. Some smaller spaces in the 1,000-to-1,500-square-foot range are available.

Though it’s too early to provide details, Da Silva said there are more big plans in Hillcrest’s future.

“We’re looking at some huge development opportunities over the coming years, with multi-res and mixed-retail uses. Hillcrest has a lot of opportunity for growth and we’re excited to see that.”

Hillcrest was the first shopping centre in Canada to house beehives on its roof, as part of a partnership with Alvéole, to pollinate local flowers and vegetable gardens. Da Silva said the bees are thriving and the population will grow from 20,000 to 70,000 by the end of the summer.

Hillcrest is BOMA BEST Gold-certified and committed to sustainability and green initiatives, including: the installation of a cistern for harvesting rain to water planting beds on the property; a retrofitted air conditioning system to save energy; four electric car charging stations; bicycle racks placed around the mall; and an 86 per cent waste diversion rate.

Hillcrest hosts a farmer’s market in its southwest parking lot on Wednesdays and Sundays from early May to late October. It also hosts blood donor clinics.