Holloway Lodging Corp.‘s (HLC-T) plan to build residential towers in Ottawa is a departure from the sector in which the company made its name, but that doesn’t mean it is making a significant shift in focus. 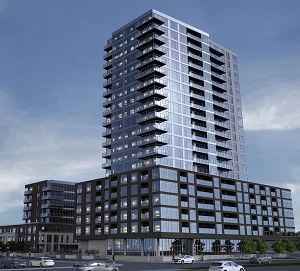 The proposal for Holloway’s West Ottawa property on Carling Avenue, where a Travelodge Hotel currently sits, would take place in two phases.

In the first phase, it will build two residential towers for apartments and/or condominiums. The second phase would contain three more towers as well as a park, expanding the estimated $200-million development to about 900 residential units.

The existing Travelodge hotel which Holloway operates will remain in operation on the site.

The company is best known as a hotel owner/operator, but the Ottawa project could contain a variety of residential uses and a retail component as well as the hotel. It also marks Holloway’s first foray into development.

“Our goal is to always do what’s best for the owners and other stakeholders of the company. In doing that, we look at, in part, where our money gets the best return,” said Michael Rapps, Holloway’s chairman of the board, and president and CEO of investment firm Clarke Inc.

“Sometimes the best opportunities are sitting right in front of you.”

As CEO of Clarke, much of Rapps’ work involves finding distressed or opportunistic investments in companies or assets, like real estate, which might be undervalued and then working to improve them for a period of five to 10 years.

Holloway Lodging became a core investment for Clarke in 2010. Rapps is mainly involved with the board on a strategic level, but he has had considerable involvement in the Travelodge property.

The proposed buildings have several potential uses. Rapps said while they are intended as apartment or condo buildings, one could easily become a seniors’ centre, depending on market conditions as the project progresses. He said although the site could have multiple uses, he is reluctant to call it a “mixed-use” development.

“A seniors’ building is an apartment building. It’s just age-targeted, and some of the services are more specific to that demographic. Hotels are kind of similar, so we’re going to stay in that area,” Rapps said. “We don’t envision putting up an office building or doing anything outside of that residential or quasi-residential approach.”

The site has been rezoned for 759,000 buildable square feet, of which less than 25,000 square feet is expected to be used for retail.

The Phase 1 buildings are expected to be between 20 and 24 storeys. The first will sit atop a six-storey podium, with retail and commercial space on the ground floor and apartments above.

“We’d love to get some tenants like Starbucks, or pubs, restaurants and bars as well as some sort of community amenities. We’ve designed it to have outdoor patio seating,” said Rapps, who said Holloway has had extensive contact with the community to determine the best uses for the site.

The second building could end up containing apartments, condominiums, a hotel, or a seniors’ residence. It will also have ground-floor retail with patio space, as well as retaining a heritage pavilion with up to 15,000 square feet of parkland.

Holloway bought the site as part of its 2014 acquisition of hotel owner Royal Host’s 35 Canadian properties. That happened as Holloway was exploring three different areas on which to focus its energies; exploring value-add hotel deals, hotel management services, and examining properties in its portfolio to determine the best future uses for the sites.

Because this is Holloway’s first development project, it represents an exciting expansion of its capabilities.

“At this point, it is our intention to start construction on our own,” Rapps said. “We would consider partnerships with appropriate partners who can accelerate or enhance the development, but we feel capable of doing at least the first building or two.”

There is no timeline for build-out. Holloway’s plan is to hold the buildings as revenue-generating assets, but it’s not averse to selling them if the right offer comes along.

Holloway also owns 6.7 acres, the current home of a Holiday Inn and a Lone Star restaurant, near the St. Laurent shopping mall in the city’s east end. The site has close proximity to LRT as well as attractive zoning, making it ripe for future redevelopment.

Rapps thinks that site could eventually accommodate 1,200 residential units, which means more than 2,000 residences between it and the Carling site. With a potential capital cost in excess of $250 million, that would mean an investment of nearly a half billion dollars in the two sites.

“These development plans are long-term plans, they’re not next-year plans,” Rapps said. “It’s just too much for Ottawa with all the other supply that’s coming in and it’s too much capital to deploy all at once.

“We’re happy to invest in these properties over the next decade.”