Toronto-based entrepreneur Michael Back watched the rise of Uber and had somewhat of an epiphany. Most of what was offered by the taxi and car-sharing app was already available: people were already able to call for a cab and pay for it with a credit card.

It just wasn’t that easy, however. Uber put it all seamlessly on a smartphone. 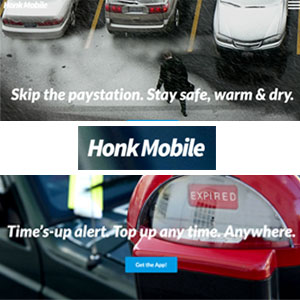 Back, who has a background in the payments industry, looked around at other industries ripe for an Uber-izing and hit upon parking. Unlike the taxi business which was already halfway there, finding an unoccupied, discounted parking spot in major North American cities is no easy task today.

There’s an app for that

Vowing “the way we park today is going to change,” Back set out a few years ago to create a smartphone app that would do for parking what Airbnb did for lodging and what Uber did for transportation: hook up lower-cost sellers of underutilized inventory to buyers.

Its app launched at the end of 2014 and the business “took off” over the past six months.

“Without sounding too verbose, I think there is a way to change the world here,” he said. “The way we park today is archaic. It hasn’t changed much in 50 years. How am I going to know if that Timbercreek building has parking? There is no way.

HonkMobile’s two challenges, as one might expect, are attracting users to download the app and to secure the parking inventory they will ultimately use.

As with Uber, Back has found users of his app become immediate fans after one or two uses, just like Uber users never again call up a taxi the old-fashioned way. “When they use us, they use us religiously.”

Millennials, of course, are already comfortable with vehicle-sharing services such as Zipcar which similarly allow them to reserve, locate, pay for and borrow vehicles for short-term use. (Those car-sharing services are also one reason behind vacant downtown condo stalls).

The process of finding parking inventory has been surprisingly easy for the Toronto company and its sales team of four, which includes Back. To date, HonkMobile has about 50,000 stalls or spots that can be accessed through the app, a number “that is doubling every quarter.”

The greatest number are in Toronto and southern Ontario cities such as London, Kitchener-Waterloo and Windsor, but it is also in places such as Buffalo and Edmonton.

HonkMobile, which counts as clients major landlords such as CAPREIT and Starlight Investments, recommends landlords price excess parking at 30 to 50 per cent of the going rate for traditional parking spots.

In an area such as Toronto’s parking-challenged Yonge and Eglinton mid-town area, HonkMobile will provide a landlord with a survey of parking rates and suggest a price.

“Yonge and Eglinton is a perfect example. You can park at the Yonge-Eglinton Centre for a couple hundred bucks a month or you can walk two blocks and park at a multi-res building (with the app) and it is $125 a month.”

Demand for non-conventional parking inventory will only grow, Back said, as the trend to urbanization intensifies (surface parking disappears) and new buildings are built with fewer underground parking stalls to cut development costs.

The company’s pitch to landlords large and small “is really simple,” explain Back. “ ‘Hi there, here’s what we do, we make you more money from your parking.’ ” That includes converting underused parking to paid parking and utilizing existing paid parking more efficiently.

The revenue split between landlord and HonkMobile is approximately 80-20, Back said.

“If you are a commercial operator, not only are we going to make you more money, we are going to save you more money because every transaction that you do with us versus your existing infrastructure is trackable, traceable, no consumables, there is nothing to fix, vandalize.

“So not only are we driving the revenue line up, we are going to drive the expense line down to some point in the future when you will not have any meters anywhere because you won’t need them.”

The idea of a parking app seems so obvious there surely must be a well-established service HonkMobile finds itself up against?

No so, according to Back.

The closest competitor in Canada is the “Green P” app that allows users to pay for some municipal parking by phone, but it works only on certain lots and does not search for or reserve spots.

That app was created by a U.S. third-party developer who has licensed it in the States where it is similarly limited.

“All they do is payment. They don’t do reservation, they don’t do the Airbnb of parking. There are pieces of the puzzle that exist but no one has aggregated it into one marketplace. To the best of our knowledge, we are the first guys to do it.”

In the midst of growth mode, Back is uncertain about the finale for his company.

“I think that there is a big opportunity here, I think parking is a huge industry and I think there is a bunch of money to be made. We are just looking to build a very successful business that creates a lot of value for real estate owners and users alike.”