A continuing battle to revitalize its downtown office market is one of the key issues facing commercial real estate owners and managers in Calgary. The transformation issues facing Canada’s retail sector are well-known nationwide. 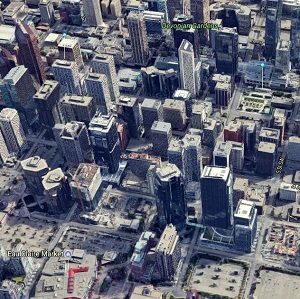 Downtown Calgary’s office market is finally beginning to stabilize and recover, panelists said during a roundtable at the Calgary RE Forum. (Google Maps image)

Both of these topics were front and centre during a roundtable on the future of the city’s commercial real estate market at the recent Calgary Real Estate Forum.

The retail world is currently under siege with the proliferation of e-commerce and the closing of many stores across the country in the past few years from Target Canada to Sears Canada.

But it’s not all doom and gloom for bricks and mortar, according to Roman Drohomirecki, executive vice-president, chief operating officer, retail, Ivanhoe Cambridge. He had a clear message for his colleagues.

“Despite what you read, retail is not dead,” he said. “There is a seismic shift that’s going on right now in consumer behaviour. You’ve got a situation where everybody gets instant gratification. You can go on your PC, your mobile device, you can order pretty much anything you want from wherever you want.”

He said developers for enclosed shopping centres are spending a lot of time “aggressively” trying to evolve.

“We need to be relevant to the shoppers of today. We need to go beyond a place to shop and become a place to be. And we have to offer an experience that differentiates us from an online experience,” explained Drohomirecki.

That includes more food and beverage options in shopping centres. He said Canadian malls have only five to six per cent of their space dedicated to  food and beverages while in Europe it’s about 20 per cent and in China about 25 per cent.

The evolving shopping centre will include more entertainment in the future and more non-traditional uses such as bowling alleys and fitness centres.

The industry is collecting data and research on consumers coming into the enclosed malls.

“There will be an evolution we’ll be chasing,” said Drohomirecki. “We’re collecting all this data but now we need to figure out how we can communicate in a relevant, authentic way with the shoppers.”

Jon Love, CEO, KingSett Capital, agreed retail shopping at bricks and mortar locations isn’t dead as shoppers are not going to sit in their basements and do nothing.

The big shopping centres, he said, are “all moving towards offering the experience which is integrating entertainment as well as shopping.”

Any gathering of the commercial real estate industry these days in Calgary inevitably will turn to the devastation in the city’s downtown office market.

The collapse in oil prices that began in the latter part of 2014 plunged the city into a brutal recession in 2015 and 2016. The downtown office market felt the pain in a big way.

With the economy spiralling downward, the oilpatch shed jobs – thousands of them – and that led to a huge spike in the downtown vacancy rate.

According to Avison Young, it reached a record level of 26.4 per cent in Q2 2017. When the Calgary economy was firing on all cylinders a few years ago it had the lowest ever downtown vacancy rate of 0.3 per cent in the fourth quarter of 2006.

When the most recent economic downturn began, the vacancy rate was sitting at 6.2 per cent in the third quarter of 2014. As the recession took hold in the city, what followed was 11 straight quarters where the vacancy rate increased, according to Avison Young.

That trend stopped and reversed in the third quarter of this year as it dropped to 25.7 per cent.

“I clearly see that the market has stabilized. Obviously, we’ve seen a quarter or two of positive absorption and while it’s a small number . . . . I think that the worst is behind us. The deceleration is over,” said Love.

He called it an encouraging sign for the market. How long it takes to get back to a balanced market is uncertain but at least the direction is set.

Hutcheson agreed with Love in the “tone of where we are in terms of the cycle.”

“We have to diversify and we have to find ways to centre the next economy,” said Hutcheson, adding the strength of Calgary and Alberta lies in its ability to innovate. “But it’s a number of years. We’ll work through it.”

Hutcheson said the traditional office space has to re-invent itself with more innovation to attract the millennial generation looking for collaborative work space and amenities in a downtown workplace.