The possibility of Canadian housing prices facing a major correction isn’t as large as many seem to believe, according to factors cited in Fortress Real Developments’ latest Market Manuscript report. 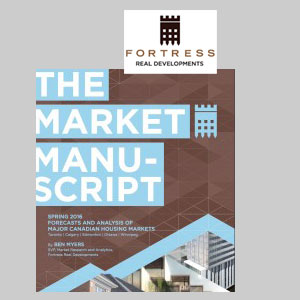 While several surveys have cited how overleveraged Canadians are, creating visions of the subprime mortgage meltdown in the United States that began in 2007 and contributed to a major recession, Fortress senior vice-president of market research Ben Myers found a more positive situation when it comes to mortgages.

“They’re using that debt to buy an appreciating real estate asset and have good equity in their homes,” he said. “Higher than Americans.”

The Fortress report quoted Manulife surveys that indicated more than half of respondents were reducing their debt and are positioning themselves to handle slightly higher payments should interest rates rise slightly.

“A lot of Canadians are taking advantage of low interest rates to make more payments on their principal or up their monthly payments as opposed to simply pocketing the difference and going out and buying luxury items,” said Myers.

“Canadians have been pounded over the head for the last 10 years that interest rates are going to go up, and they haven’t. But they anticipate that they will.

“I don’t think that anyone expects interest rates to stay at this historically low level, and they can’t go much lower anyway, so most people are prepared for the rates to go up.”

Mortgage fraud not a major issue

While 38 per cent of mortgage brokers and agents are concerned about mortgage fraud causing housing instability, Myers said the previous decade’s mortgage crisis in the U.S. has led to those involved in the business setting out to do “better due diligence and do better underwriting on the deals that they were bringing forward” so that mortgage fraud isn’t a big issue.

There were 590,000 new or resale homes purchased with a new mortgage over the past year, according to data from Mortgage Professionals Canada, and lawyers were accused of illegal activity in just 54 cases.

Foreign buyers have been blamed for driving up housing prices and 25 per cent of mortgage professionals surveyed supported a ban as a way to prevent a housing correction in Canada.

Just eight per cent of their clients were singled out as foreign purchasers or recent immigrants, however, although Myers isn’t sure how many use mortgage brokers because many of them may be flush with cash and don’t need to go through those channels to get funding.