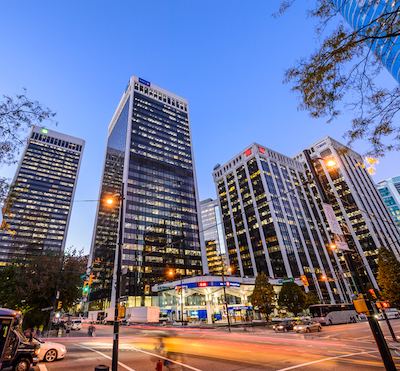 Hudson Pacific Properties’ strategy to update and rebrand downtown Vancouver’s landmark Bentall Centre is paying off with the signing of major tech tenant Shopify, which will move its West Coast headquarters into the Bentall IV building by year’s end.

Shopify, founded in Ottawa, is the latest tech company to make a significant move into Vancouver. The city is quickly becoming a tech-industry destination due to a robust talent pool and proximity to other West Coast tech hubs.

Shopify has announced plans to hire 1,000 employees at its new permanent Vancouver office.

The e-commerce company will take over more than 70,000 square feet in floors 27 to 30 at Four Bentall Centre, in space vacated by Deloitte Management Services in November. Since then, operator and co-owner Hudson Pacific has been demolishing the four floors of office space in the 35-storey tower at 1055 Dunsmuir St., so a new tenant could work with a blank canvas.

Chuck We, Hudson Pacific Properties’ senior vice-president, Western Canada, said Shopify is finalizing its design as part of its application for a building permit.

“Our renovations are really focused around the repositioning of the asset,” he said in an interview. “The Bentall Centre has always been a prime business address in downtown Vancouver and it’s always had a high level of occupancy.

“But, the initiative here is to really reposition that classic legacy office space as something that can not only be great for professional services firms, but also tech companies that are now emerging in Vancouver that want to look at new developments and other innovative products.

“We think that the Bentall Centre, by renovating its common areas, the ground-floor lobbies and all the retail and amenity offerings for tenants, will also address a lot of that demand.”

To boost the Bentall Centre’s profile, We said the company also has plans to offer public event programs in its outdoor areas during the summer months.

Los Angeles-based Hudson Pacific purchased the four-tower, 1.45 million-square-foot Bentall Centre in a joint venture with an affiliate of Blackstone Property Partners in May 2019. We, former vice-president of Oxford Properties’ Vancouver office, joined Hudson Pacific at that time.

It was Hudson Pacific’s first move into the Vancouver market and We said the company has further plans to invest in Metro Vancouver.

The Bentall Centre is 97 per cent full, so it wasn’t mandatory that the company do improvements.

“The last round of major capital in Bentall Centre was really in the late 1990s. And as an investment, the Bentall Centre, having such high occupancy, was really just one where you could just keep the ongoing maintenance of it and it would take care of itself,” said We.

“But. the view that we at Hudson Pacific (have) is that an asset like that can really do a lot more.

“It can attract a different set of tenants with different demographics and we think the Bentall Centre, if done properly, it can be used as a recruitment tool for tenants, where they are trying to attract and retain the best talents in the city, in a competitive employment environment with really low unemployment.”

Shopify had already been using a small WeWork space in the Bentall complex, so the company knew of Hudson Pacific’s new ownership role, said We. Shopify’s broker had reached out to Hudson Pacific and We said the tech company got on board with the new recruitment strategy.

“(The lease) is extremely significant on a couple of fronts: one, it’s the type of employer and workforce that our repositioning is working to attract,” said We. “And in the meetings we had with Shopify, they really appreciated the repositioning that is happening around the complex and the work that we are talking about doing.

“A complex like Bentall Centre was something they understood, and when we started to articulate the repositioning and what was happening and what that could mean to them on the recruitment- and retention-type angle, they really appreciated that. We are thrilled that they agreed with our concept.”

We said Vancouver had attracted attention with Amazon’s plans for 1.1 million square feet of office space in the former Canada Post building, bringing a potential 10,000 jobs. However, it was also the arrival of other American tenants that included Microsoft and Sony Pictures Imageworks that put Vancouver on the radar, said We.

“We’ve been getting calls from tenants just interested in expansion up and down the West Coast, so they are Los Angeles-based, San Francisco-based, Silicon Valley-based, Seattle-based companies, that are looking at Vancouver as a really viable alternative — not just for back-office functions but as another avenue for growth.

“So, the Shopify deal is just another move in that trend of these West Coast markets emerging as centres of tech and innovation and digital media.”

An enhanced employee experience isn’t exclusive to tech workers, he added. We said lawyers and accountants are also excited about the Bentall improvements, which include locally sourced food and beverage options.

The improvements are not just designed to attract new employees, but also to reduce turnover.

“These workers that can work globally are looking for that kind of experience, and in a small way, it ties back to the kind of real estate we can provide, something where people are excited to come to the office, and not just kind of put their heads down and do their work, but create an environment where people are actually excited to spend their day,” We said.