Humaniti, a first-of-its-kind mixed use development

Cogir and the Fonds immobilier de solidarité FTQ are teaming up to develop a more than $200 million mixed-use project in downtown Montreal that they hope will attract a wide cross-section of the city’s humanity. 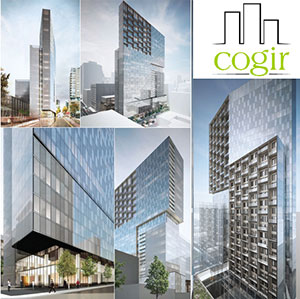 Dubbed Humaniti, the project will combine a hotel, office space, commercial space, rental apartments and condominiums, making it a first-of-its-kind development in the country, its developers say.

“To the best of our knowledge, it’s the first mixed-use project in Canada with five usages within the same building with all five components communicating with each other,” says Mathieu Duguay, president and CEO of property management firm Cogir Immobilier.

Located in the Quartier International area near Old Montreal and the Quartier des Spectacles, the development will comprise a 39-storey tower covering the block bounded by Viger, de Bleury, de la Gauchetière and Hermine Sts.

The 51,000 sq. ft. site is across from Place Jean-Paul-Riopelle and near the Palais des congrès de Montréal convention centre and the headquarters of Quebec’s pension fund manager, the Caisse de dépôt et placement du Québec.

“The Quebec market was very quiet in terms of construction of multi-family rental buildings until two or three years ago when it had started to make sense economically to build them,” Duguay says. “We’re big believers of the urbanization of the downtown core and we had a mixed use (project) in mind” for the area.

The FTQ owned land on the project site “and were looking for the right development idea,” he says. “We came to an agreement to buy 50% of the site.”

Cogir had previously partnered with the Fonds immobilier de solidarité FTQ on two other housing projects, including the Devimco-developed L’Hexagone rental complex in Montreal’s Griffintown area.

Work, live, play and an app

Duguay says the mixed-use project is based on a “work, live, play” concept. “It’s a new way to look at real estate development where you want to try to create synergies between all these different usages within the same complex and to create a sense of community for the people who will be the users.”

To help develop that sense of community, occupants of Humaniti will have a smartphone app that will allow them to connect with each other. “It will sort of be like a chatroom,” Duguay says. “You’re going to be able to exchange your interests,” whether that involves looking for a person to take care of a dog, a good handyman or someone who knows how to deal with cable TV issues.

The app will also allow residents to do anything from pay their rent or make customer service requests to connect to a virtual concierge.

“We want to build a community where everybody helps each other if they can and there’s a value of living together,” he says.

Humaniti will also include an “urban chalet,” rooftop swimming pools and a “state-of- the-art” 4,000 sq. ft. gym. In addition, five electric car-sharing vehicles will be available for the exclusive use of the up to 1,500 people who will live in the rental units and condos.

Rainwater and snow will be collected and used to water greenery on the terraces and the rental property will be the first in Montreal with LEED certification, Duguay says.

While most of the residential units will be one or two-bedrooms, up to 10% will be three-bedrooms, which will give families access to the development, he says.

Condos will sell for an average price of $575 a square foot before taxes and parking.

“We’re not shooting for a luxury project; we’re shooting for the best quality-price relation,” Duguay says. “We’re basically using the price tag of any other new construction within the market.”

Given that the condos will offer unobstructed 360 degree views and the technology and community aspects of the project, “we think we’re going in with absolutely fair and competitive pricing.”

Duguay adds he is not concerned about some reports that the Montreal condo market is over-saturated.

The fact that office tenants will have the option to buy their spaces as condos “is pretty rare in Montreal,” says Duguay, noting there are only a handful of such projects in the city. He expects the office space to generate interest from IT firms, lawyers and notaries in Old Montreal.

Construction is slated to begin in January or February, following demolition of a long-vacant four-storey structure on the site that once housed a Pascal hardware store. The project will be completed in early 2020.

Founded in 1995, Cogir manages more than 150 properties in Quebec, Ontario and Nova Scotia. Cogir administers more than 7 million square feet of commercial, industrial and office space and 17,200 units in facilities for seniors and in multi-family residential properties.

The Fonds immobilier de solidarité FTQ has 38 projects in development and 43 properties under management.