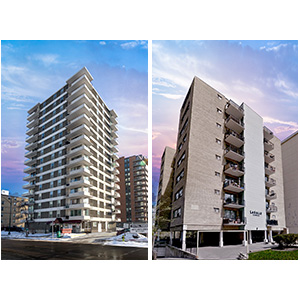 Bids are being accepted for the properties until March 28 and the buildings can be purchased individually or as a package. The buildings are La Salle Tower in Toronto’s Davisville neighbourhood and Calgary’s Central Towers in the Beltline.

“(Industrial Alliance) is probably just re-arranging their portfolios a little bit. I don’t think there’s particularly any need to sell or anything like that,” said Manganiello.

“I believe these are the only two residential assets in their portfolio and my understanding is they’re not really big players on the residential side of real estate. They tend to focus more on retail and office.”

Manganielo said the bid process is used to maximize interest and, naturally, pricing.

“We do as much pre-work as possible in terms of due-diligence items – having environmental studies done, building condition reports – it sort of gives the (buyers) a good idea of what it is they’re bidding on and it also reduces risks over re-trade or some sort of abatement happening later on because a lot of the issues are presented up front,” he said.

“So it gives the bidders a good idea . . .  in terms of pricing of what they’d like to bid for the asset.”

The Toronto building is 48 units at 135 Lawton Blvd., constructed circa 1961. Cushman & Wakefield says it is a well-maintained and professionally managed building with excellent value add-on opportunity and current rents below market average.

It describes it as an exceptional location with redevelopment potential and within walking distance of the TTC Subway.

“It’s an exceptional property especially in terms of location,” said Manganiello. “It’s located in Midtown Toronto. It’s a very desirable part of the city. Lots of young professionals live in the area . . . an area with some of the highest rents within the City of Toronto. Overall, it’s a very, very nice neighbourhood.

“It’s highly desirable both from a tenant renting and from an owner perspective. These assets in that area don’t trade very often . . . maybe once every five, 10 years in some cases. So when they do come up, they do tend to generate a lot of interest because there isn’t a heck of a lot around there.”

He said about 83 per cent of the units in the building are two-bedroom suites, unusual for the market. Such units are easier to rent and they tend to stay rented and more stable over time.

“The site is situated next to a cluster of two semi-detached homes and one single-family home. We had a study done by a very reputable planning engineer in the City of Toronto. If you were to assemble the entire parcel, it would be just under half an acre,” said Manganiello.

“You could probably put up a new 12-storey rental with about 120,000 square feet of gross floor area. That’s what’s achievable as is with the official plan today.”

Calgary’s Central Towers in the Beltline

It is described as a well-maintained and professionally managed building.

The building was constructed circa 1967 as a condominium.  The apartment suites could be improved by a new owner and then sold off to homebuyers or investors.

However, Manganiello said this asset would more or less stand on its own. The site has no room for expansion and already has quite a bit of density.

“The Calgary market is definitely coming back. We had a bit of a lull with where oil’s been. Calgary tends to be somewhat of a cyclical market because of the oil industry, but I see that coming back and we’re seeing it coming back on the industrial and office leasing side. The residential will most likely follow as it already has,” said Manganiello.

“It’s a very desirable property and it’s something that doesn’t trade very often in the city, either. I would think it’s probably going to generate a significant amount of interest there.”

According to Canada Mortgage and Housing Corp., the primary vacancy rate in the Toronto census metropolitan area reached a 16-year low of one per cent last fall.

For the Calgary census metropolitan area, it was 6.3 per cent, down from aseven per cent the year before.