The upgrade of InnVest REIT’s (INN.UN-T) hotel portfolio continued with the completion of its latest acquisition, the Ottawa Marriott, a $115-million deal that gives it an upscale downtown property and also prompts it to sell older properties. 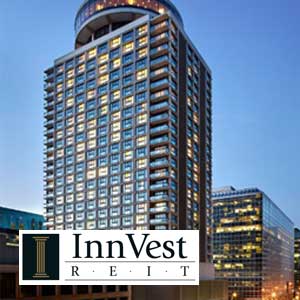 “We like Ottawa as a market, so we wanted to find the right hotel in the city centre of that market,” said Drew Coles, InnVest’s president and chief executive. “We are in a lot of city centres in Canada and we were a little bit vacant there for a well-branded hotel.”

Funding of the purchase will be accomplished through a combination of mortgage financing (approximately $65 million) with the balance coming from the sale of non-core properties.

“We should be able to raise somewhere around $40 (million) to $50 million, probably closer to $50 million.” Any shortfall will be covered by cash on hand.

InnVest has identified 10 or 11 “older properties” it is preparing to put on the block. Currently the only one on the market is the Holiday Inn in Oakville, Ont.

“That is officially on the market and then we have a list of nine to 10 more that we are just going through the approval stages and we would anticipate going out to the market within the next couple of weeks.”

The REIT has hired Colliers to quarterback the sale of the Oakville asset but has yet to appoint brokers for the other properties. Coles’ phone is already ringing as “the word has gotten out” about its plans.

Five acquisitions in a year

The Ottawa buy is the REIT’s fifth hotel acquisition in just over a year and part of its strategy of adding “high-quality assets in city-centre markets.”

With the planned divestitures, InnVest’s portfolio count will drop from 110 properties to 100. “We’ll be right around 14,000 rooms and that is all Canadian properties,” said Coles.

The REIT chief has a two-track strategy for InnVest.

“It is (to) produce more with what we have so we are focused on generating year-over-year results out of our existing hotels and we are continuing to focus on those that don’t perform or those that don’t belong – are non-core – we will continue to sell those,” said Coles.

What’s non-core in the REIT’s books? Lower-income generators, low barriers to entry that carries with it the threat of new supply coming to the market and capex requirements unlikely to be recouped. For InnVest, these properties are for the most part located in secondary and tertiary markets.

“There is a back-end market for someone to buy them, whereas we are a corporate machine and sometimes a local buyer, someone who understands that limited service space (and) can sometimes figure out a different use for that real estate entirely or with their local knowledge and boots on the ground, they can figure out how to do a little bit better,” said Coles.

The REIT also recently sold the Delta Trois-Rivieres and the Holiday Inn Dartmouth.

InnVest kicked off its portfolio upgrade at the end of 2014 with the purchase of 644-room Hyatt Regency Vancouver from Hyatt Hotels Corporation for $140 million, or $217,000 per room.

It partnered with Kingsett again last year in the purchase of the 575-room Courtyard by Marriott in downtown Toronto (with Kingsett owning 67% and InnVest the rest) as well as the acquisition of the 244-room Hotel Saskatchewan in Regina.

“We purchased the Hyatt in downtown Vancouver just over a year ago and that was a terrific purchase for many reasons. So while it is not a gap, it would certainly be an area we would strengthen, so we would look to up our exposure in that area.”

The other noticeable blank spot for InnVest is a downtown hotel property in Halifax.

Coles expects properties to shake loose, eventually. “I think there is a supply out there that we can wrestle away, it is a matter of being patient and a bit prudent.”

He cites the Ottawa example, a market the REIT has coveted as long as Coles has headed it. “We were lucky enough that we have a great relationship with the seller.”

Ottawa Marriott was purchased from a private seller, rather than a hotel operator.

Coles sees a mix of private equity, institutions and hotel operators providing properties going forward. One was Ivanhoe Cambridge, which put the Royal York and Hotel Vancouver up for sale. “They still hold some assets so we are seeing some of those come to market, some of them are private real estate companies and some are institutions.”

As for the pricing environment? “The industry is in a pretty good spot and I think pricing is not, for Canadian hotel assets, not overcooked. I think it may get there. In contrast, the U.S. market is pretty overcooked. There are a lot of buyers out there looking for assets so the seller expectation is pretty high.”

One general worry for hotel operators is the growth of Internet-based accommodation-sharing services, most notably Airbnb.

“It is hotly discussed” in the industry, Coles said. The real challenge for hotel operators is to determine the Airbnb effect during major events such as last summer’s Pan Am Games in Toronto.

“It is supply coming into the market, it is unique supply, it is interesting supply for the customer. It is here to stay. Are we really concerned about it? I would say not at the moment.”