Commercial real estate investment in the Greater Toronto Area (GTA) is on pace to set a record this year after $4.6 billion in transactions took place in the third quarter. 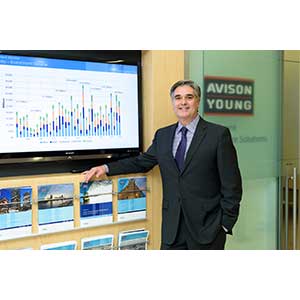 Avison Young, in a new report, says the level of CRE activity, bolstered by strong investor interest in office buildings, was 12 per cent higher than the previous quarter.

“This amount of capital has not changed hands since the second quarter of 2013, when $4.5 billion worth was sold. Total investment for the first three quarters of 2017 increased to $11.1 billion – up 23 per cent year-over-year.

For perspective, $11.8 billion was traded in all of 2016,”  AY reported in the Third Quarter 2017 Commercial Real Estate Investment Review – Greater Toronto Area.

“If you look at the office sector in particular, we’re seeing record low availability and vacancy rates. That’s contributing to investors flocking to the office side of the business,” he says.

“The commercial real estate fundamentals in general in the Greater Toronto Area and downtown Toronto are good and investors are seeing this as an opportunity to park some money here more so than never before.

“Properties for sale or coming to market for sale often display in-place rents that are below market, representing future revenue upside for prospective buyers.”

The Toronto downtown office vacancy rate in the third quarter was 2.7 per cent, down significantly from 6.1 per cent a year ago. A similar story is in the Greater Toronto Area where office vacancy fell to 6.8 per cent from 7.9 per cent last year.

“The top tier asset classes don’t necessarily change especially when it comes to the office product because they tend to be controlled and owned by the institutional investors and right now when an asset does come to the market that is an institutional great type of real estate you’ll see buyers lining up to get their hands on it,” says Argeropoulos.

Amazon HQ would propel Toronto into the “stratosphere”

A successful bid by Toronto for Amazon’s second headquarters combined with recent news Sidewalk Labs, a sister company of Google, is teaming up with Waterfront Toronto would propel the city to another “stratosphere” among global cities, he says.

Toronto is one of the 238 proposals received by Amazon for its HQ2 which will make its decision sometime next year.

Sidewalk announced it will invest $50 million US in a year-long planning process for Toronto’s waterfront to demonstrate how data-driven technology can improve urban life.

“All of the right things are happening right now for Toronto to be able to be considered a global city and clearly one aspect is the amount of investment that not only local buyers are putting into the market but also external, foreign interests,” says Argeropoulos. “It would just elevate Toronto to that Paris, London sort of stratosphere.

“That combination with Amazon would do wonders for the city. It just elevates the value of commercial real estate in Toronto, especially in downtown Toronto, but in the region in general. People want to put their money where they see safety as well as growth. That’s the key.”

The Avison Young report says the office sector logged back-to-back $1-billion-plus quarters. Investors have deployed more capital into the sector through the first nine months of 2017 than in all of 2016.

Third-quarter office sales advanced 30 per cent over the second quarter to $1.8 billion (39 per cent of the GTA total) – bringing the year-to-date sales tally to $3.8 billion.

The office sector is on pace to match or eclipse the $4.3 billion that sold in all of 2012.

“My view is that the pressure to place capital continues to be at the high end of the scale. Volumes are increasing in part due to some passive investors trading up and some opportunity or active investors trading out of some successes into new challenges or opportunities,” says Sandy McNair, president of The McNair Group, a real estate advisory firm.

The Avison Young report says Dream Office REIT (D.UN-T) continued its disposition program with KingSett Capital on the receiving end of two separate transactions, including a 50 per cent interest (with partner AIMCo) in the two-million-square-foot Scotia Plaza for $682 million in Toronto’s financial core, as well as a portfolio of assets, largely in Toronto’s suburban west market.

Investor interest will now turn to another high-profile asset. Brookfield Property Partners (BPY.UN-T) is offering for sale up to a 50 per cent non-managing interest in its 2.2-million-square-foot, two-tower Bay-Adelaide Centre complex.

Other findings in the Avison Young report include:
• After rising for seven consecutive quarters, investment in the industrial sector declined a modest five per cent in the third quarter to $924 million (20 per cent share). Investment through the first three quarters of this year is $2.6 billion, representing a 44 per cent year-over-year jump in sales, and more than the $2.5 billion that sold in all of 2016;
• Investment in the retail sector declined 10 per cent between quarters to $759 million (17 per cent share) to bring the year-to-date dollar volume to $2 billion. By comparison, $1.8 billion sold during the same period one year ago, and $2.8 billion in 2016 overall;
• ICI land sales increased $70 million or 12 per cent quarter-over-quarter to $661 million (14 per cent share) in the third quarter, as more than 4,200 acres changed hands. The sector’s $1.6 billion in sales year-to-date is four per cent ahead of last year’s nine-month performance and is on track for a $2-billion year;
• Starved for product, and in keeping with previous quarters, multi-residential properties were the least-traded asset class in the GTA, despite investment dollar volume rising 43 per cent quarter-over-quarter to $475 million (10 per cent share). Year-to-date multi-residential sales are up 21 per cent year-over-year to $1.1 billion.