Just a few short years ago, Minto Capital Management’s move to bring in Investors Real Property Fund as a 50 per cent owner of its iconic Minto Place complex in downtown Ottawa would have raised many eyebrows. 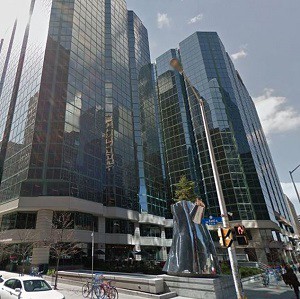 Today, however, it’s just business as normal for the company as it continues to recapitalize properties and seek new investment opportunities.

“Five years ago, everything was done with proprietary capital,” said Glen MacMullin, Minto’s senior vice-president, investment management. “Five years ago, it might have been a surprise that we recapitalized one of our crown jewels, whereas going forward our business model is going to allow for it.”

It does not include a fourth property, the multi-residential 185 Lyon St. tower, which also shares the same city block.

It’s a prime site, and Minto had no trouble finding a partner for the class-A towers, which have a cross-section of tenants anchored by federal government agencies, Minto Corporate Services, Defence Construction Canada (affiliated with the Department of National Defence) and the Ontario government Workplace Safety & Insurance Board.

The buildings are currently approximately 95 per cent leased.

The site includes about 45,000 square feet of retail and restaurant space, as well as amenities such as a gym and pool.

Minto will maintain the other 50% ownership of Minto Place and will continue to oversee property management and leasing for the complex.

No financial details of the transaction were released.

The buildings have all earned major certifications and/or awards. 180 Kent, built in 2009, was the first LEED platinum core and shell office tower in Canada.

The Canada and Enterprise towers and the Atrium which attaches them were built in 1988, though the Atrium underwent a significant renovation in 2012. All three have been certified LEED EB Silver. 180 Kent was named BOMA Outstanding Building of the Year in 2012, and all three are either BOMA Best Gold (Canada, 180 Kent) or Platinum (Enterprise).

Proceeds from this transaction, as with other recent Minto deals, will be used to expand the company’s portfolio. This strategy is central to Minto’s business plans moving forward.

In fact, it’s why Waters was brought on board about five years ago to head up the once family-run company.

“We’ve been in biz for 62 years. Through first 55 years of that, everything we did was on our own account. Starting about five or six years ago, we began a transformation where we began morphing into an investment manager for institutional investors,” Waters said.

“This transaction that Glen and the team have put together is a further step in that direction. We’ve raised a couple of different funds in the past and we have plans to raise more investment funds in the future.

“And, we have several managed accounts with some fairly high-profile investors. This one at Minto Place is yet another step in that direction.”

In terms of future growth, Minto is looking at both acquiring existing properties, as well as developing new sites. MacMullin said despite a severe crunch for prime multi-family property on which to develop – especially in major centres – Minto is well positioned.

It is currently working on three major multi-res projects, all on “excess land” beside existing properties. Minto is building an additional high-rise in Oakville, adding approximately 190 units in Toronto Leslie-York Mills and a two-tower project, also in Toronto, with a pension fund partner.

A fourth project is in discussion stages.

The one mitigating factor for these sites could be the Ontario government’s Bill 124 legislation, which includes rent controls in an attempt to make housing more affordable.

Minto is waiting to see the final legislation before making and decisions.

“I think the jury is still out,” Waters said. “We are studying our new developments very closely. The full details of the plan are not really clear.”

Any form of rent control, he said, “is not helpful.”

No matter the short-term implications, however, Waters said Minto is on track for more transactions in coming months.

“Investors will commonly see us transacting going forward in either these types of partnerships, or investment vehicles,” Waters said. “I think that is going to be the substantial majority of our business going forward.”

Investors Group is a part of IGM Financial, which manages more than $147 billion in assets and is a member of the Power Financial Corporation group of companies, one of Canada’s largest and most respected companies.

With 1,200 employees across Canada and Florida, the company has built more than 85,000 new homes and currently manages 15,000 multi-residential units and 2.7 million square feet of commercial space.