A Toronto-based office co-working company is expanding to Vancouver, aiming to tap into an increasingly competitive downtown market dealing with plummeting vacancy rates. 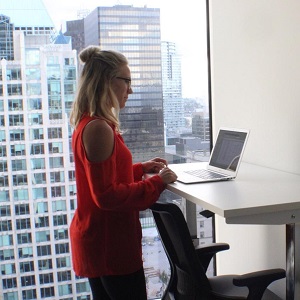 “We have people moving in (this) week, on Nov. 1,” said Kane Willmott, the company’s co-founder.

The 14,200-square-foot space will include a member’s lounge, a co-working area with dedicated desks and 58 personal offices, he told RENX in an interview.

The company’s move into Vancouver joins the rising tide of co-working companies like WeWork and Spaces, servicing businesses which are seeking shorter and more flexible leases as the city’s office vacancy rate continues to fall.

IQ Office Suites opened its first such offering in 2012 at 140 Yonge Street in Toronto. It has since added co-working offices at 545 King Street West; 250 University Ave.; and is soon opening a fourth Toronto location at 150 King Street West.

We’re “more of a luxury brand,” Willmott said. “We really target a lot of satellite offices and really mature companies, looking to get a foot in the market. We have technology firms, we have accounting, and legal.”

Willmott expects more of the same in Vancouver.

He said IQ will offer leases that range from two months to two years, providing flexibility and immediacy to newcomers and quickly evolving firms.

“Now it’s really as simple as coming to the Vancouver market, signing a six-page agreement and you’ve got space,” he said. “You’re working that same day.”

Flexible office space is where commercial real estate is moving, Willmott said. “The challenge with most companies today is they don’t know what their needs are. They have no idea if they will be five people a year from now, or two people, or 50.”

He said the offices come finished and furnished. “We’re going to be up against the landlord across the street who wants a 10-year term.”

“Demand for co-working is going to continue”

Colin Scarlett is an office leasing specialist and executive vice-president with Colliers International in Vancouver. He specializes in tenant services and does leasing work in this market for Regus’ co-working brand, Spaces.

“I’m confident that the demand (for co-working space) is going to continue,” he told RENX this week.

“The cost to build out office today is at a level that we’ve never seen before,” he said.

“And the length of lease term that a traditional landlord would require and would want to sign is typically quite long — anything from 10 years plus for a new building these days.”

Vancouver’s downtown office vacancy had dropped to five per cent, the lowest it’s been in four years since the peak of the city’s recent wave of office tower construction.

It all adds up to a perfect marketing storm for flexible co-working spaces, Scarlett said.

Much of the local demand is coming from large “enterprise” companies like Salesforce, Microsoft and Amazon, companies that want to have local branches, but need flexible lease terms for quick expansions or exits.

Earlier this year New York-based WeWork leased seven floors of the Bentall III office tower in Vancouver, according to media reports. WeWork had most of that space taken by Amazon to expand its foothold in the city, the Financial Post reported.

The report said Amazon took WeWork’s floors while it secures purpose-built space in a new building that Oxford Properties is developing at 401 Georgia Street.

Scarlett said companies like Amazon aren’t as interested in 10-year leases. “They’d much rather do a month-to-month or year-by-year (lease) with a company like Spaces,” he said. “Real estate is never as organic as somebody’s business.”

Other companies such as the Hive and The Profile are also providing co-working and event spaces in Vancouver’s heritage Gastown neighbourhood. (The Profile also has a location downtown and another in North Vancouver).

Scarlett said there is no question that many of the office landlords will be looking more to co-working companies to lease large chunks of existing and upcoming space.

As for IQ Office, the company has ambitious expansion plans.

“We want to be the largest independent Canadian-owned co-working operator,” Willmott said. “We want to be in every single major market in Canada.”