Ivanhoé Cambridge investing $1B in Montreal 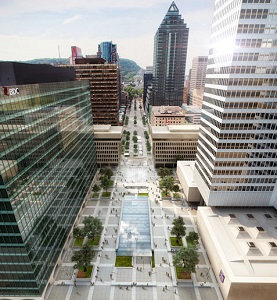 The PVM renovations are the latest in a series of major announcements involving Ivanhoé’s flagship properties in Montreal, in what it calls Projet Nouveau Centre.

Other key aspects of Project Nouveau Centre include renovations to the Fairmont The Queen Elizabeth Hotel which concluded last summer and the new 27-storey, class-AAA office tower Maison Manuvie which was inaugurated Monday.

The final piece of the puzzle involves renovating the Montreal Eaton Centre and connecting it to the adjoining Complexe Les Ailes, in a project that will run until 2020.

Ivanhoé’s investment at PVM will bring the development’s outdoor spaces to their original planned purposes.

The primary work involves revitalizing the large outdoor esplanade, which acted as a major civic square for the city in the years after PVM opened in 1962, but lost that vocation when skylights were installed during 1980s renovations.

In addition, for the first time the renovations will allow for pedestrian access to the Esplanade from McGill College Avenue – Montreal’s most prestigious business street – via a grand staircase to be built in space that currently serves as the entrance to the parking garage. As well, the facades of two of the development’s smaller buildings will be retrofitted.

The renovations, to be conducted in 2018 and 2019, add to the $160 million invested in PVM over the past 10 years to maintain the property and help it earn both LEED Silver and BOMA Best certifications.

PVM gave rise to Montreal’s modern downtown and acted as the starting point for its pedestrian underground city.

“It still looks fantastic,” Bernard Poliquin, senior vice-president, office, Quebec at Ivanhoé Cambridge, said of PVM. “This place is better than any other location in Montreal that’s from that vintage.”

Poliquin says the membrane of the esplanade needs to be replaced to ensure water does not leak into the retail concourse below.

“We took a step back and said, ‘If we’re going to do this, why don’t we do something that will bring the space back to what its original intent was, a grand civic place?’ ” he said. “Also, do an intervention that will improve the client experience and propel Place Ville Marie for the next 25 to 30 years.”

Four skylights installed during the 1980s renovations, which essentially closed off the open space in the esplanade, will be replaced by a glass pavilion providing access to the shopping concourse and underground city. At 50-by-150 feet, the glass pavilion “is actually going to be a work of art in itself,” Poliquin said.

Built by the company that does glass work for Apple stores, it will be the largest such structure the firm has created.

“Even the beams are going to be translucent. It’s a completely transparent structure that’s going to be sitting in the middle of the esplanade” and will flood the food court below with natural light.

Original plans for PVM had called for a passerelle (or skywalk) at the site that would have ended between Cathcart and Ste. Catherine Sts., but they fell by the wayside.

Building a passerelle today would create problems for emergency access vehicles, he said. However, after Ivanhoe consulted original PVM architect Henry Cobb, the decision was made to create a grand staircase to create a link between the esplanade and McGill College.

“We want to bring back the original intent but in a modern setting and experience.”

Parking garage entrance will be moved

The parking garage entrance will be moved to the west, which will require the relocation of some retail tenants.

The remaining renovation work involves replacing the stone and concrete facades of 2 and 3 Place Ville Marie. “Every year we do inspections and we saw there were some small pieces that were starting to come loose,” Poliquin said. “We’re just being prudent. There is no imminent danger.”

Instead of repairing the facades, “we just decided to go with replacement. We’re making sure that we have a solid structure for the next 50 years.”

The aluminium facade of the main 47-storey cruciform-shaped tower at 1 Place Ville Marie does not require replacement.

“Aluminium is very light and isn’t altered by cold and freezing, which is a problem with most buildings that are covered with stone or concrete. We don’t have that problem with 1 Place Ville Marie.”

Poliquin said PVM’s current office vacancy rate stands at just below 10 per cent, which compares favourably with the overall vacancy rate of about 12 per cent for class-A office spaces in downtown Montreal. PVM has about 2.4 million square feet of office space.

Ivanhoé recently announced the Royal Bank of Canada, which has been a tenant at PVM since its opening, will stay on and move its commercial banking branch from the mezzanine level of 1 Place Ville Marie to the shopping concourse at the corner of Cathcart and Robert Bourassa (formerly University) Streets. The move is aimed at giving greater visibility to the bank.

The arrival of Sid Lee does not mean Ivanhoé is trying to change PVM’s tenant profile, “but we’re definitely adapting to it,” Poliquin says. Communication and tech firms worldwide are moving into spaces in central business districts formerly occupied by the financial sector.

Poliquin said PVM has leased most of the space it lost when Deloitte moved to the new Tour Deloitte, adding Sekure Merchant is another new tenant that will occupy 33,000 square feet.

“People are coming to PVM for the right reasons – its location, quality of the space, quality of the product, amenities and access to transport – everything you’re looking for when you need to relocate your business.”