Mic Mac Mall will bring life to its former Target store as part of Ivanhoé Cambridge’s $55-million revitalization of the Halifax-Dartmouth shopping centre. 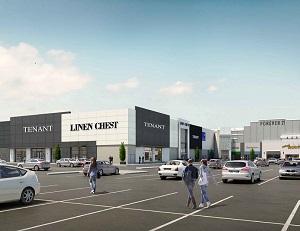 “The retail industry is a competitive market, and the same goes for Halifax and Atlantic Canada,” said Mic Mac Mall general manager Tamitha Oakley. “We believe in investing in shopping centres and enhancing our position and our competitive mix and tenant mix for the benefit of the customers. It’s about the experience.”

Mic Mac Mall opened in 1973 at 21 Mic Mac Blvd. in the Halifax suburb of Dartmouth. It was part of Cambridge Shopping Centres Limited before that company merged with Ivanhoé to become Ivanhoé Cambridge. It underwent renovations in 2010 on its third floor, which includes H&M, Gap and Le Chateau.

Mic Mac Mall is the largest enclosed shopping centre in Atlantic Canada at 715,441 square feet. There’s also a 50,000-square-foot pad for a Chapters Indigo store. The mall has 126 stores and attracted 5.1 million visitors who spent $188 million last year. It has $633 in sales per square foot.

Mic Mac Mall’s 120,000-square-foot Target space, which has been empty since the spring of 2015, will be transformed into four smaller stores.

The first to open will be a new-concept, 17,500-square-foot Linen Chest. It will feature 3D “lookbook” open-frame structures which will showcase vignettes of curated merchandise stories for an improved shopping experience. It will also include an interactive kitchen with cooking demonstrations every weekend and an espresso bar serving free cappuccinos.

Oakley said Ivanhoé Cambridge will announce the other three new retailers in the former Target space in the near future. Mic Mac Mall’s occupancy rate is 75 per cent and will be well above 80 per cent once the Target space is filled.

Mic Mac Mall will also receive upgrades to its common areas, including a renovation of the food court on the third level with new seating, LED lighting and improved dining options. The majority of the work will be completed by the end of 2019.

“We are open and operating with business as usual through the renovations, which have commenced,” said Oakley. “We’ve had some minor impacts with relocating some tenants.”

“There were a number of sustainable measures that we’ve engaged in previously,” said Oakley, noting Mic Mac Mall has a BOMA BEST Platinum certification (recognizing excellence in energy and environmental management and performance in commercial real estate).

Ivanhoé Cambridge is a real estate subsidiary of Caisse de dépôt et placement du Québec. Through subsidiaries and partnerships, it holds interests in more than 1,000 residential, office, retail, industrial and logistics buildings. It held more than $60 billion in assets at the end of 2017.

Ivanhoé Cambridge announced a $200-million redevelopment of the Montreal Eaton Centre on rue Sainte-Catherine, which involves merging it with Complexe Les Ailes, earlier this year. It will include Canada’s first Time Out Market, which will include 36,000 square feet comprised of 16 food offerings, two bars, a demonstration kitchen, a cooking academy, a retail shop and a cultural stage when it opens late next year.

Ivanhoé Cambridge and Simon also opened the 428,000-square-foot Premium Outlet Collection Edmonton International Airport, which has six anchor tenants and about 100 retailers, in May.