Bee Commercial is hoping to create a buzz among commercial brokers with the launch of its new Canadian online commercial listing service. 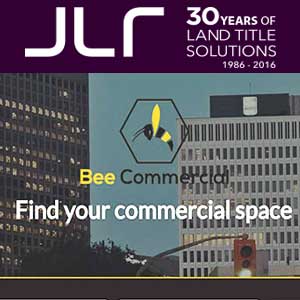 The listing service was launched in late January at the Banff Western Connection, a conference organized by the Canadian Real Estate Association (CREA) and the provincial real estate associations of B.C., Alberta, Saskatchewan and Manitoba. Bee Commercial had a kiosk at the conference.

The listing service is a new player but the company behind it is no newbie. Bee Commercial has been created by JLR, a Quebec reference for land registry data similar to Ontario’s Teranet. The Montreal-based company was founded in 1986 and has 50 employees.

“What differentiates us a lot is that it’s a product we’re creating with the industry for the industry,” he says.

While CREA operates an industrial, commercial and investment listing service at Realtor.ca/commercial, Laroche says Bee Commercial will be complementary to that service.

“We don’t want to compete with CREA,” he says. “We want to specialize in commercial.”

Bee Commercial – a word play on the term “busy bee” – will contain public access for investors looking to buy or lease commercial properties in Canada and a number of search filters.

Among its features, the service will offer brokers listing data input, advanced search with customizable fields, a micro-website for listings, and give them the ability to design their own flyers, publish on social media sites and create their own websites.

The service will not contain advertising and Bee Commercial will not create value-added products with the information supplied by brokers.

As well, the listing service provides white label solution for real estate boards seeking to integrate its search engine into their own systems, Laroche says.

“We want people to understand that we offer personalization. It’s not an on-the-shelf product like many others,” says Monick Bergeron, account manager – real estate professionals at JLR.

That differentiates it from Catylist, the commercial listing service used by more than 30 realtor associations in the U.S.

Bee Commercial is being offered to real estate boards across Canada and not to individual brokers.

“If a commercial broker sees the product and says ‘Wow,’ he can’t subscribe,” Bergeron says. “But he can recommend to his real estate board that ‘I saw a super product. We should look into it.’ ”

The reaction to Bee Commercial among brokers who attended Banff Western Connection was very good, Laroche says. He notes the company gave 15 demos to representatives of real estate boards during the conference and several follow-ups presentations are planned.

Listings in place by summer of 2017

Laroche expects the first deals with Canadian real estate boards to come in the next three months. Listings should start appearing on the site within 30 days of the signing of a contract.

The cost to real estate boards to be part of Bee Commercial will vary depending on boards’ number of commercial brokers.

Bee Commercial is being deployed outside Canada as well, says Laroche, noting a deal has already been signed with a real estate board in Belgium.

JLR has invested around $200,000 in Bee Commercial to date and the goal is to be profitable after the second year of operation.

Bergeron says commercial brokers are often ignored when new products are developed for the real estate industry because there are far more residential brokers. Bee Commercial aims to help redress that imbalance, she says.