A Feb. 28 groundbreaking ceremony marked the launch of Toronto’s 99 Atlantic, the second part of a Kevric Real Estate Corporation project that began with the redevelopment of the now fully leased 40 Hanna. 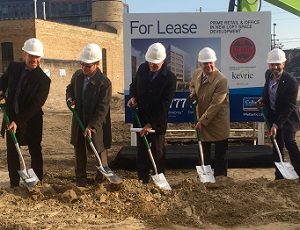 “On this land we’re beginning the construction of a new 145,000-square-foot office building that also includes retail,” Kevric president Richard Hylands said at the groundbreaking.

“The project will be very much a loft-style building which will be in keeping with the neighbouring building that we redeveloped recently, which was the Brunswick billiards table company’s building for the longest time.”

The development is located in the heart of Liberty Village, a formerly declining industrial area that’s been revitalized in this millennium with new condominiums, office space, stores, bars, restaurants and craft breweries.

Kevric has been involved with properties in the neighbourhood since 2007, but sold off others while retaining 40 Hanna and 99 Atlantic because of their potential. The company had to wait for existing leases to expire before it could put its plans into action.

Liberty Village has been a magnet for creative companies in the technology, arts, media, marketing and design fields. Hylands is confident 99 Atlantic will attract the same types of firms.

“The main reason why these companies are coming here is because the labour force they want to attract likes the quality of the neighbourhood and what it has to offer,” said Hylands.

A post-groundbreaking reception was held in a new Live Nation Canada event space containing a bar, kitchen and stage in the offices it leases at 40 Hanna. Kevric modernized that property while respecting the historical integrity of the 113-year-old brick-and-beam building. Loblaw Digital, Trend Micro and Organic Garage are other tenants.

Colliers International is responsible for finding tenants for 99 Atlantic, which is scheduled to be ready for occupancy in two years.

“We have some very serious tenants that we’re negotiating with for a few floors,” said Hylands.

Kevric is targeting a LEED Silver certification for 99 Atlantic. It will recycle materials during demolition and the finished product will include: green and white roof sections; four sides of natural light; a bicycle storage room; tenant shower facilities; energy-efficient heating, ventilation and air-conditioning systems; high-efficiency lighting; and sustainable curtain walls and construction materials.

Hylands formed Montreal-based Kevric in 1997. The company specializes in the redevelopment and repositioning of existing properties and the development of new ones, primarily in Montreal, Toronto and Ottawa/Gatineau.

Kevric’s other major Toronto project is Consilium Place, a property it acquired in 2012 just south of Highway 401 and east of McCowan Road and the Scarborough Town Centre. It offers more than one million square feet of business and retail area in three towers.

“We did a total upgrading of that complex,” said Hylands. “We redid all of the common areas. We re-leased the complex. There’s very little vacancy left in it today.

“I think we created a whole new environment there, because we ripped up all of the landscaping that was all around the complex and recreated a garden-type setting so that people have breakout areas outside of the building.”

Kevric is in the process of receiving approvals from the City of Toronto to build a fourth tower of approximately 170,000 square feet.

Hylands said his company has more in the pipeline in Toronto at sites around Liberty Village and just east of the Don Valley.

“It’s a little too early to provide details, but they’re going to be exciting projects.”

Construction is also underway on a seven-storey office building, which will be slightly bigger than 99 Atlantic, at 1100 Atwater Ave. in Montreal.

“It’s a conversion of an old Royal Bank data centre that we completely took over at the end of last year and started demolition,” said Hylands.

“We’re gutting the whole building and putting in new windows. It’s across from the subway station and has a good work-live-play environment around it.”