Newfoundland and Labrador’s Kim Saunders is the first non-American to be named a BOMA Fellow by Building Owners and Managers Association (BOMA) International. 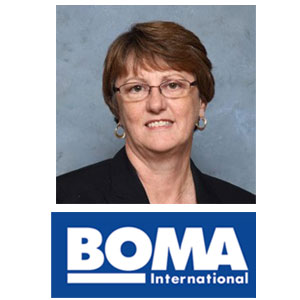 Saunders was honoured for displaying exemplary and sustained contributions to the commercial real estate industry, her profession, her community and BOMA at all levels, and for having continually answered the call to leadership and service throughout her career.

“It is a great honour to be named a BOMA Fellow,” said St. John’s-based Saunders. “It certainly wasn’t on my radar.

“I’m the type of person who likes to dig in and get things done, but attention is not something I seek out. And to be the first non-American makes it even more special. I’d like to say that there are many, many people who I have had the privilege to work with in BOMA Canada and its locals that work tirelessly for our industry and are true leaders.

“I’ve learned so much from them and continue to learn.”

Saunders broke into the commercial real estate industry in accounting and branched out to property management and leasing in 1993. She now serves as East Port Properties, Ltd.’s property manager for Newfoundland and Labrador.

She was a founding member of the BOMA Atlantic NL chapter in 2003 and was actively involved in the establishment of BOMA NL in 2007. She’s been active at the BOMA Canada level since 2007.

“Kim was instrumental in having the premier of Newfoundland and Labrador formally mandate the adoption of BOMA BEST, Canada’s leading green building certification, as official provincial policy, and has been remarkably dedicated to a variety of BOMA initiatives, including the TOBY Awards,” BOMA Canada chair Don Fairgrieve-Park said in a media statement. “I can think of no one more deserving.”

Saunders was also instrumental in having East Port partake in the pilot project for the new BOMA BEST Sustainable Workplaces program, which had its official widespread launch on April 22 to coincide with Earth Day.

“Our tenants were already benefitting from our sustainability initiatives and actively participating in them,” said Saunders. “We provided our tenants updates on what we were doing to reduce our impact on the environment and how they could help.

The BOMA International Fellows Program, launched in 2011, is among BOMA International’s highest honours. It was established to provide recognition to individuals for outstanding contributions and also provides BOMA International with access to the best, brightest and most accomplished BOMA members to serve in a variety of capacities.

BOMA Fellow candidates are required to be a BOMA International member for a minimum of 10 years and be an active member in good standing at the time of application. A candidate may be nominated by a BOMA local association or BOMA member. Applications are judged and Fellow status is decided by a panel of previously named BOMA Fellows.

Saunders will be officially recognized at the BOMA 2016 International Conference & Expo, set for June 25 to 28 at the Gaylord National Resort & Convention Center in Washington, D.C.

BOMA Fellows receive a plaque, trophy and/or certificate and a pin. They’re also granted VIP status at various BOMA International events and may receive invitations to VIP receptions and programs as well as other special considerations and recognition. Fellows-only programs and events may also be scheduled, and Fellows will have the opportunity to design and participate in exclusive programs and retreats and take part in strategic conversations that support their networking, business and professional development goals.

BOMA Fellows are entitled to use the title in their professional credentials and have it for life as long as they abide by the BOMA Fellows code of ethics. They’re expected to remain active in BOMA and support its activities as long as they’re able to do so.