After a two-year-long battle of wills between joint venture developers Allied Properties REIT (AP-UN-T) and Westbank Corp. and city planners, suites in the unique KING Toronto condominium and mixed-use development should go on sale in about a month. 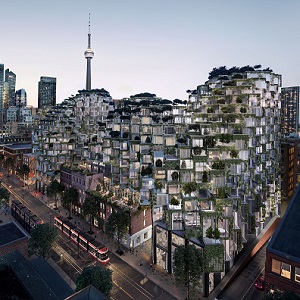 Allied and Westbank are about to take the KING Toronto condos and mixed-use development to market. (Image courtesy Westbank)

“Despite sustained efforts on the part of city planners to impose a conventional, unsightly and uninspiring vision for this very special site, Allied and Westbank stood firmly behind the original vision and ultimately prevailed,” said Allied president and chief executive officer Michael Emory.

“In the process, we respected the heritage buildings and helped create a new mid-block connection between King and Wellington.”

Bjarke Ingels Group, which is based in Copenhagen and New York City, designed KING Toronto with input from Toronto’s Diamond Schmitt Architects. It was inspired by architect Moshe Safdie’s Habitat 67, which was built for Montreal’s Expo 67.

KING Toronto consists of irregular stacks of glass blocks which, when combined, look somewhat like an iceberg. Each suite will have its own terrace with a tree planted in a purpose-built, irrigated planter and a trellis with vines to add to the building’s character.

The KING Toronto site will feature a number of laneways and an extensively landscaped central courtyard. The courtyard, designed by local architects Public Work, will feature a misting device called a cloudmaker, restaurant patios and performance space. Landscape architect Claude Cormier + Associés will also play a role in creating a site which promises to be one of the most original in the city.

“There will be a material amount of storefront retail space and a smaller amount of creative office space,” said Emory.

Transform its section of King Street

Emory believes KING Toronto will both become part of and transform its section of King Street by “integrating old and new in a way that both preserves the character of the neighbourhood while intensifying the utilization of the underlying land in a creative and transformative way.”

“The residential condominium component of the project will offer a first-rate amenity package, including an extensive indoor pool and lounge area, hot tub, and best-in-class gym and spa facilities with adjoining outdoor terrace and a separate games/party/multi-purpose lounge,” said DeCarli.

KING Toronto’s construction should begin next year. It will be Toronto Green Standard-compliant and is targeting a LEED Gold certification.

Allied and Westbank are 50-50 partners on KING Toronto.

Vancouver-based Westbank was established in 1992 and has more than $25 billion of real estate projects constructed or under development.