KingSett Capital says it has re-acquired the 33-acre American Business Park, located on the Toronto-Mississauga border near Pearson International Airport, after selling the property to Cominar REIT (CUF-UN-T) in early 2014. 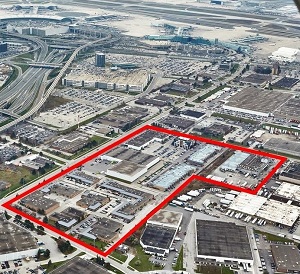 KingSett announced the purchase on LinkedIn. The property will become part of its core income fund.

No financial details were disclosed.

Another attraction for the purchase is its proximity to the future site of the Greater Toronto Airport Authority’s Regional Transit Centre, a hub which will allow easy access to GO, UPX, TTC and Peel transit systems. KingSett says it is “looking to expand our industrial footprint and tenant offerings in such strategic locations.”

According to the Colliers International Q2 Industrial Market Summary for GTA West, “Cominar REIT acquired the American Business Park in Mississauga from Kingsett Capital in the highest sale of Q2 2014 in the GTA West Market with a total purchasing price of $57,167,000 representing $121 price per square foot.”

At the time, the property comprised just over 470,000 square feet of leasable space.

The property was subsequently included in the sale of all of Cominar’s non-core assets earlier this year to Slate Acquisitions Inc., on behalf of the Slate Canadian Real Estate Opportunity Fund I L.P., a division of Slate Asset Management. The 97 properties were sold for $1.14 billion.

This is not the first property Slate has quickly sold. On March 27 it closed on the sale of seven properties in the Greater Toronto Area and Atlantic Canada to Slate Office REIT (SOT-UN-T) for $191.4 million. The price represents $192 per square foot.

KingSett Capital has $10.5 billion in assets under management and a total portfolio of $12.5 billion.