An events and office space which has transformed what used to be a heavy industrial site is about to open in Kitchener, Ont. 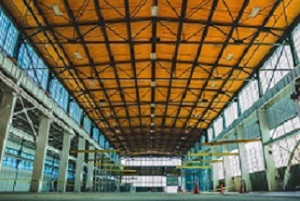 The Factory is one component of the new Lot42 events facility which is about to open in Kitchener, Ont. (Image courtesy LOT42)

Lot42 is a multi-purpose events and multi-use facility located on the site of a former steel mill and manufacturing property. It’s nearing the end of a 10-month retrofit and conversion which its owners say is creating a “global flex campus.”

As part of its soft opening, Lot42 will host the city’s annual Oktoberfest festival Sept. 29 through Oct. 6. The grand opening is set for Oct. 21.

The facility sits on 17 acres and includes 150,000 square feet of events space dedicated to the arts, technology, manufacturing, music, athletic and community endeavours. The conversion is costing up to $10 million.

“We’re the first self-proclaimed global flex campus,” said David Brisson, CEO and president of Lot42. More simply put, the title refers to the fact its owner is seeking out global companies to make use of the site and its assets.

Brisson comes from an entrepreneurial background in sports marketing and entertainment, building companies as well as working with major sports leagues. He has been involved with this project for a year.

Many components to Lot42

Lot42 is made up of several spaces which will accommodate different uses.

For speaking engagements, festivals and concerts, The Factory provides 40,000 square feet of event space. For trade shows, film production and parties, there is the 14,000-square-foot Studio 42.

The Courtyard is 27,400 square feet of outside spaces for events and festivals. The Back Yard, another outdoor space, is 10.5 acres suited for hosting concerts.

There is also The Gantry, which will provide space for weddings, photography and film production.

“Our truss system came over from Germany. All the steel this place was built with was from Ardelt (in Germany). The bones of this building came from somewhere international; for us it was really important to represent that.

“When we sat down to write the business plan, flexibility was important, but we didn’t want to take events away from Toronto or local vendors. So we drew a line in the sand and said ‘let’s go after global type events and target global companies.’ ”

Transition from industrial to tech

Kitchener has historically relied on its manufacturing industry, but has come to be characterized most recently as a burgeoning tech sector home to numerous international, and many more emerging, companies.

The Lot42 site, which is located at 41 Ardelt Rd., originally operated as a steel mill and was built in 1955 by German industrialist Rudolf Ardelt.

The campus is now owned by Ron Doyle, who purchased the property for $2 million in 1994. The site is managed by his son Patrick Doyle and was host to several manufacturers for about 20 years after the mill closed and before its current transformation began.

Ron Doyle is a known developer in the area, having been influential in the redevelopment of the Hacienda Sarria, another Kitchener event space noted for its elegance.

Before Brisson became attached to the project, he said Lot42 was a seven-figure income property. As part of this latest development, the Doyles started to transition the property’s previous tenants as early as 2014.

“Next wave” of tech in Kitchener-Waterloo

“In Kitchener-Waterloo, there has been a lot of innovation. There hasn’t been that place to come out and pump your chest saying, ‘We are Waterloo,’ ” Brisson said. “Ten years ago, it was Blackberry; five years ago it was OpenText; now you’re starting to see the next wave of this community.

“As these companies grow from 100 to 500 to 1,000 people, there hasn’t been that facility in Kitchener-Waterloo, or Southwestern Ontario, where you can put 5,000 people in a room and have a full-fledged AGM.”

There are currently 35 events booked for the facilities, including household names like Google, Deloitte, Communitech and Mercedes Benz.

Portions of every building on Lot42 are also occupied by tenants such as the sports development facility Athlete Factory, Renishaw’s only North American solutions centre, Let’s Dance dance academy, and social impact hub Innovation 42. Most tenants have entered into leases of five years or more.

Brisson said there are plans to also build an eight- to 12-storey office building on the property.

“It was a multi-million dollar decision to transition this space,” said Brisson. “There was a sense of confidence in our ability to go to market through some of our partnerships.

“People are falling in love with the property.”