Kubota Canada Limited, Red Crest Developments and The Behar Group will develop about a million square feet of warehouse, office and hotel space to anchor the new Pickering Innovation Corridor, along Highway 407 east of Toronto. 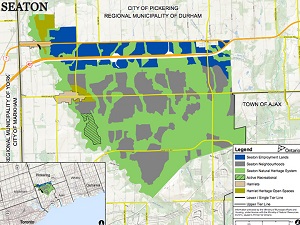 Kubota is the largest commitment so far, signing an agreement to build 565,000 square feet of industrial and commercial development as part of its first phase on the site. The company will be moving operations from its current Markham facility to the Pickering site once it is completed in 2019.

The agreements were announced by the City of Pickering Friday afternoon, although Kubota had also issued a release on Thursday.

The Pickering Innovation Centre is considered by the city to be a catalyst for future job growth and economic development along Highway 407 in Durham Region. It is directly adjacent to the Seaton Community, which the city expects to house up to 70,000 people once it is completely built out.

Kubota will build a 500,000-square-foot facility, plus an additional 65,000 square feet of head office space in its first phase. The state-of-the-art facility will feature enhanced testing and training and increase warehousing and logistics for the company. Kubota has purchased 50 acres of land at the site and could expand its campus to more than a million square feet in future phases.

The company said the land and buildings represent a $67-million investment.

“It had become obvious that we needed a new state-of-the-art facility to ensure we could live up to our commitments to meet the increasing needs of our growing customer base,” said Bob Hickey, president of Kubota Canada, in a prepared statement.

The company, which has worked out of its current Markham facility since 1975, manufactures a wide range of products including tractors and other heavy equipment; construction, landscaping and public work equipment; residential lawn and garden equipment; commercial turf products; and utility vehicles.

The Pickering Innovation Corridor is comprised of 800 acres of land in the Seaton community, located along Highway 407 between York-Durham Townline Road and Brock Road.

The City of Pickering bought the acreage from the Province of Ontario in order to directly market, sell and manage the economic development opportunity.

“The City of Pickering’s bold and innovative approach of purchasing and managing a portion of these provincial lands was instrumental in signing the Innovation Corridor’s first anchor tenants. It demonstrates that we’re hungry and are willing to do what it takes to earn your business,” said mayor Dave Ryan in a release.

“More importantly, these initial investments will kick-start immense commercial and industrial growth along Highway 407, which will create thousands of new jobs and strengthen both Pickering and Durham’s economy over the next two decades.”

As a gateway to the East GTA, Pickering (population 94,000) is strategically located where Toronto, York and Durham Regions meet.

Seaton is a new community located in Central Pickering, designed to attract 30,000 new jobs and 60,000 new residents to the city by 2031.

The city says new businesses will have direct access to major highways; an educated and skilled labour force; state-of-the-art infrastructure; and a wealth of emerging greenfield employment lands fronting Highway 407.

The Innovation Corridor and Seaton Community are both located in the area of the so-called Seaton Lands, originally the North Pickering Land Assembly. Those lands were expropriated in the 1970s by the provincial government as part of a plan to built a major community to service a new federal airport, which was also to be built in the area.

The airport has never been built.