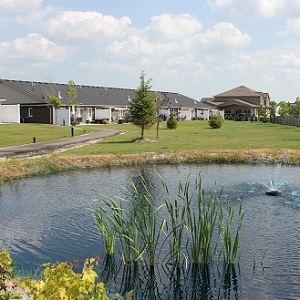 The model revolves around a customer purchasing a dwelling, but renting the land it sits on within a land lease community.

Parkbridge president and chief executive officer Andrew Blair said customers save about 30 per cent in upfront costs at his company’s communities compared to freehold purchases where people purchase their house and the land. That results in lower mortgage payments down the road.

Because buyers are not purchasing the land, they must consider some other factors in the transactions. Obtaining financing for leasehold properties can sometimes be more difficult and larger down payments may be required.

Leases can run as long as 99 years and purchasers of properties take over the leases of the previous homeowners, which means resale could become more difficult as each remaining year passes. It can also be more difficult to build up equity for the same reason.

“It’s the upfront financial savings that initially tends to capture people’s attention,” said Blair. “But what people appreciate the most after becoming one of our homeowners are the intangibles.”

Blair added Parkbridge, a Calgary-based company, continues to manage its communities after the residents move in. It works with homeowners to ensure there’s ongoing investment in infrastructure, grounds maintenance, standards, social activities and shared amenities that can include recreation halls, fitness centres, swimming pools and walking trails.

“There’s a sense of community at these properties, whether they’re family-oriented or retirement-oriented,” said Blair. “They tend to be extraordinarily vibrant and people find that they’re with like-minded people who really care about their homes and properties.

“And we’re there alongside them to make sure that things are well looked after.”

Parkbridge’s residences — including manufactured or mobile homes that come in on wheels, modular homes that are delivered to the site and then put together, and more traditionally built houses — are constructed with environmentally friendly features. A couple of its Ontario communities have received Energy Star recognition for energy efficiency, and that’s a growing priority.

“Because we continue to own the communities for years and years and years, we want to make sure that our rents are always reasonable. If we set rents that are too high, our community will not be successful. It’s different from a freehold developer that can try to make as much money as possible in a couple of years and then be gone. That’s not our business.”

Parkbridge’s communities have occupancy rates of 95 per cent or more, according to Blair.

Since land lease still isn’t highly recognized in the real estate market, Parkbridge has programs underway to educate consumers and show various levels of government how it can play a role in affordable housing policies. Blair spoke in front of the Rural Ontario Municipalities Association in January to tell its members how land lease may be able to provide benefits for existing residents and also attract new ones.

“I was delighted that our presentation was standing room only and we were approached by close to 50 different municipalities after who wanted to explore how they might work with us to develop a land lease community in their area,” he said.

Parkbridge is owned by the British Columbia Investment Management Corporation (bcIMC), which holds $135.5 billion in assets under management around the globe on behalf of more than 554,000 public sector clients in B.C. Blair sees this as a major advantage.

“We have the financial backing to do whatever makes sense, whether it means developing a new community where the market requires it or continuing to invest in our communities, which is incredibly important to our customers. With bcIMC as our sponsor, obtaining sufficient capital isn’t an issue.”

Blair said bcIMC is firmly committed to Parkbridge and is a responsible investor. The financial returns, he added, are stable, reliable and higher than those of government bonds.

“Whether it’s in terms of treating customers the right way, being around for the long term or building and operating in an environmentally friendly way, they are very, very forward-looking and thoughtful investors. They want to make a reasonable return on their money, but they want to do it the right way.”

Most Canadian land lease operators are smaller players with a handful of properties or less. Other significant investors include: CAPREIT (CAR.UN-T) , which has 31 manufactured home communities in B.C., Alberta, Saskatchewan, Ontario, New Brunswick and Prince Edward Island; and Keystone Communities, which has 26 manufactured home communities in Alberta, Ontario, Quebec, New Brunswick, P.E.I. and Nova Scotia.

Parkbridge has three retirement communities, one family community and one resort in development.

Solstice at Tower Ranch is a 160-site retirement community in Kelowna, B.C. that overlooks the Okanagan Valley. The second phase of “exclusively designed west coast style homes” is in pre-sale and will feature more than a kilometre of walking trails on-site.

Prices begin in the mid-$200,000s and, at this site, construction generally takes about 20 weeks before an owner can take occupancy. The monthly land lease starts at $495 per month and there’s a monthly community maintenance fee of $125 a month.

“Our only challenge there is keeping up with demand,” said Blair. “People can’t buy homes as quickly as they want to.”

Village at Bay Moorings is a 120-site retirement community in Penetanguishene, Ont. that offers waterfront views and walking trails. The fourth phase — featuring 1,200-square-foot quad-plex homes with two bathrooms, a one-car garage and a two-car driveway — is under construction. Prices begin in the mid-$200,000s. The monthly land lease starts at $450 per month and there’s a monthly community maintenance fee of $175 a month.

Residents enjoy full access to the amenities of the 360-slip Bay Moorings Marina, including a heated swimming pool and tennis court.

The Bluffs at Huron and Royal Papineau

The Bluffs at Huron is perched atop bluffs overlooking Lake Huron near Goderich, Ont. The 460-site family community has seven home models ranging in size from 1,098 to 1,254 square feet and includes an 11,000-square-foot complex that includes: a recreation centre with a lounge, bar, meeting room and library; a fitness centre with workout equipment, indoor pools, showers and change rooms; an assembly hall that can seat 300 people and features a full kitchen; and a large outdoor deck.

Blair said there’s plenty of enthusiasm for The Bluffs at Huron and sales are going well.

Royal Papineau is a cottage and RV resort located among a chain of mountains and surrounded by three lakes near Lac de l’Argile, Que., 50 kilometres north of Ottawa-Gatineau.

It features full-service seasonal and overnight sites, rental RVs, a motel, a convenience store, a restaurant, a recreation hall, a swimming pool, a beach, a marina, trails, a skateboard park and volleyball, basketball, tennis and shuffleboard courts. Four-season chalets will be offered next year.