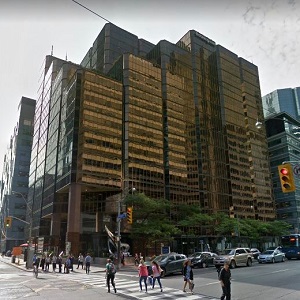 This 14-storey 70 University Ave., office building on University and Wellington St. W. in Toronto is one of the assets seeded into LaSalle’s new Canada Property Fund. (Google Street View image)

The fund was launched in December with an initial seed portfolio of $440 million from an international institutional investor which transferred to LaSalle a sizable portion of its portfolio in five of Canada’s six major markets. An additional $310 million of assets from the investor – for a total of $750 million – is available for subsequent transfers.

Foreign investors like the low Canadian dollar as an entry point as well as the country’s transparency, says John McKinlay, CEO, Canada of LaSalle Investment Management.

“There is a little volatility down south and certainly opportunity in Canada seems a lot more stable and very agnostic when it comes to foreign capital being invested in Canada.”

McKinlay adds that among Europeans, current U.S. politics “is a point of discussion.”

But what really resonates with most investors is Canada’s long-term track record, he says.

Chris Langstaff, senior vice-president and head of research strategy, Canada at LaSalle Investment Management, notes Canada’s 15-year performance has seen total returns of around 10 per cent on an unlevered basis, putting it neck and neck with Australia, slightly ahead of the U.S. at nine per cent, and ahead of Japan at five per cent.

While many international investors have asset allocations in the U.S., Europe and Asia, they have little or no exposure to real estate in Canada, Langstaff adds.

“They’ve always liked it; they’ve always known it’s been a very stable and transparent and open economy that performs well,” he says. “They just never knew how to get their toe tapped into the water.”

The fund currently has nine assets.

LaSalle declined to provide details about its holdings, citing a confidentiality agreement with the seed investor.

However, RENX has been able to confirm one of its major assets is the 14-storey 70 University Ave., office building on University and Wellington St. W. in downtown Toronto. Among its other eight assets are office and industrial buildings and multi-residential buildings in five of the country’s six major markets.

The fund has “no retail out of the gate but we’re in the process of looking at a number of retail assets,” McKinlay says. Specialty assets like self-storage, medical offices and student housing are also being considered for the fund.

LaSalle has a long-term track record in the value-added space that can be brought to bear to the fund, he says.

“We are not going to be buying the price perfection trophy assets that get all the headlines,” says McKinlay.

He says LaSalle Canada Property Fund will have core fundamental assets that will be kept over the long term and will buy and add value to many “strong defensive investments.”

McKinlay says the remaining $310 million from the initial investor will be transferred to the fund as it is built up. “The reason we did that is very much to give us flexibility and allow us to be nimble with respect to regional weighting and property types with the larger assets.”

The fund is currently conducting its next equity close which should be completed by mid-February, with about $340 million of equity from international investors. LaSalle is also scheduling meetings with existing preferred Canadian clients to raise Canadian equity. To date, clients in the fund are primarily pension funds.

McKinlay says the fund is distinct in that there is one simple fee – no acquisition or disposition fees or other fees. LaSalle’s senior management team is also investing in the fund.

LaSalle Canada currently includes 21 professionals and has made recent hires to beef up its team, he says.

The fund is aiming for a minimum participation of $10 million, depending on the client. “The European appetite is there and they tend to make bigger investments,” McKinlay says.

Prior to the LaSalle Canada Property Fund, LaSalle has had four closed-end funds.