Leasing on Montreal LRT corridor to get boost: Panel

Montreal’s Technoparc could emerge as the victor of the leasing stakes when the city gets its new light-rail transit network, says Laurent Benarrous, principal at Avison & Young in Montreal. 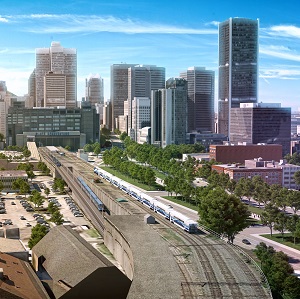 When Montreal’s LRT system is complete, it will provide a boost to leasing along the rail corridor, a panel heard at the Montreal Real Estate Strategy and Leasing Conference.

When the REM (Réseau électrique métropolitain) is completed, it will be the science and high-tech companies on the campus in the borough of Saint-Laurent “that emerges as the winner,” Benarrous says.

He was speaking at a panel providing an overview of the leasing market during the Montreal Real Estate Strategy and Leasing Conference on Oct. 12.

The Technoparc Montréal will have its own dedicated REM station when the 67-kilometre line is completed in 2020 or 2021, one stop away from the line serving Pierre Elliot Trudeau International Airport.

Benarrous says tech companies such as gaming firm Ubisoft are scattered across several buildings in the district. But such companies are now big enough to go from “cool loft spaces” to having their own integrated campuses.

Launched 30 years ago, Technoparc is home to 100 companies and about 7,000 employees and forecasts it will have 10,000 employees by 2021. In a report to Quebec’s public hearings office on the environment on the impact of the REM, Technoparc estimated the arrival of rail transit would increase public transit users to the site from 6.8 to 15 per cent.

Benarrous says the REM will have a relatively neutral effect on downtown Montreal, as the area is already well-served by the Métro. Still, the REM could help downtown resist competition from the suburbs.

As for the South Shore of Montreal, Benarrous is less bullish about the potential benefits of the REM. Three new REM stations that will make their home in South Shore Brossard might lead to the migration of satellite offices of accounting and engineering firms, but not much more, he says.

However, Anne-Marie Sauvé, a real estate broker at NAI Commercial, said the retail market will benefit from the REM. She noted leasing of Solar Uniquartier, a massive $1.3-billion mixed-use project in Brossard led by Devimco that will have its own REM station, is going well.

Peter Mouhteros, senior associate, industrial services group at JLL says there may be small rent increases for industrial properties close to REM stations in the West Island of Montreal. Suburbs such as Baie d’Urfé and Ste. Anne de Bellevue, now considered distant, will benefit from the arrival of the trains.

Overall, Montreal has seen an increase in demand for industrial space in the last few years, linked in large part to low interest rates, Mouhteros says. This demand is likely to continue at least in the short-term.

Mouhteros notes the recent expansion of a terminal at the Port of Montreal and the popularity of Highway 30 have helped east-end industrial vacancies drop. “Investors are bullish on the area.”

In addition, land prices in Montreal are slowly creeping up and construction demand is strong, he says. “The city is finally in a market that is seeing some speculative construction of industrial.”

Mouhteros adds he does not see the trend in build-to-suit industrial spaces diminishing, as distribution centres and warehouses require 28-foot ceilings.

He notes cannabis companies are expressing interest in older industrial buildings with 18-foot ceilings for marijuana cultivation centres (or grow-ops). The same interest holds true for data centres, which see high ceilings as a liability as it requires them to chill more space.

Martine Sirois, director, research, valuation and advisory at Altus Group, noted the Montreal area is home to about 20 per cent of Canada’s industrial space.

Slated to begin next year, the four-year project will see 2.2 kilometres of the street – from Atwater to Place des Arts – redone and will feature heated sidewalks on part of the stretch.

On the office leasing front, Benarrous says there have been no major or exciting transactions so far this year, but he expects movement at the end of the year and early in 2018.

Several tenants could make deals for spaces ranging from 50,000 to 250,000 square feet, in what will amount to a game of musical chairs. However, these deals will not create an imbalance in the market because the city’s economy is solid, he says.