The Government of Canada is the largest occupier of office space in Ottawa and Gatineau, so Keith Radford had a rapt audience when he discussed its future plans during Tuesday’s 2017 Ottawa Real Estate Forum. 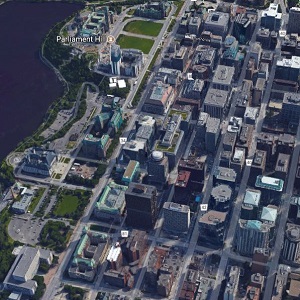 The Government of Canada owns and leases more than 41 million square feet of office space in Ottawa and Gatineau. (Google Maps image)

Radford, the assistant deputy minister, Real Property Branch, Public Services and Procurement Canada (PSPC), had a lot to talk about. At the top of the list, for the more than 600 executives in attendance, was how workplace trends and sustainability programs might affect more than 10 million square feet of private-sector leases coming due over the next five years.

“Nobody wants to move,” Radford told the assembly. “If we go to a client and say, ‘Hey, do you want to pack up and move?’ most clients would say ‘Absolutely not.’

“I would say typically the preference when we are working with our clients . . . it’s ‘How do we minimize impact on the operations of that particular organization?’ I think that should be somewhat reassuring.”

But, from Workplace 2.0, to greening and greenhouse gas reduction initiatives, to better accommodating an influx of new, younger employees, the public service has a myriad of initiatives on the go. All impact the commercial real estate it wants to lease.

“The demographic is shifting,” Radford said, emphasizing a major turnover is occurring within the public service. “Thirty to 40 per cent of the public service today can retire in the next couple of years, (we) really think of who is coming in and replacing us.

“The whole thought process around that group of people coming in is much different than yours and mine and getting in the car. It’s a totally different mentality and the investments we are making are for the new (employees).”

In total, the federal government occupies about 41,600,000 square feet of the 65 million square feet of office space in the National Capital Region. About 40 per cent is leased from the private sector.

While there are fears among owners of older properties that, without significant upgrades they could lose government clients, Radford said he feels the feds should consider more private-sector leases – not fewer.

“The preference would be to move toward a leasing portfolio when we are talking about office space, so I don’t think that dynamic will change in the Ottawa area.”

A major challenge for PSPC is moving its workforce to modern practices. Only about 10 per cent of the public service is working in a 2.0 atmosphere, said Nathan Smith of Cushman and Wakefield Ottawa, who was leading the discussion with Radford.

“I would not suspect there will be a heavy shift or change in that time period though I continue to remain optimistic.”

Smith sought insight into specific initiatives, including a government preference for properties within 600 metres of a transit station or hub. He offered the scenario of an existing property with transit access (though not at a hub) and expansive parking for the workers.

“I don’t think it’s 600 metres and you are out,” Radford said. “I think there is a desire to get closer to light rail, but if it is well-served by transit, etc., then it is served well.”

Access to transit is part of the government’s greening and sustainability initiatives, and Radford suggested landlords think ahead to retain government clients.

“I think the government wants us to influence the build sector in and around greening,” he said. “So you will start to see consultation with this audience in and around leasing future facilities which get maybe a little more support . . . if they are sustainable, if they are green, if they meet standards (such as LEED or other designations).”

PSPC is already doing his with its owned buildings, through a four-phase review of all fixed assets.

Phase One, underway now, is focused on science-based assets. Other phases include office and warehousing; examining infrastructure and assets such as Parks Canada property, waterways and other “different” assets; and finally security institutions.

“I think you will also see a role for the private sector even in special purpose, science (properties). If I were to think about labs, I don’t think the public service has built one in a while,” Radford said.

“But innovative financing is a principle of the go-forward position on that portfolio plan, so look to 3P type arrangements in building them, managing them as a service, providing even the IT into those services as well.”

The greening of the government’s own portfolio, Radford said, is designed to be an example for others in building rehab or retrofit projects.

“When we look at the actual cost for rehabilitation … we can take something that is a LEED Silver rehabilitation example like 875 Heron Road, or Place du Portage on the Gatineau side, or Lester B. Pearson or Terrasses de la Chaudiere, and we can with a modest increase in looking at the life cycle costs over 25 years get a significant increase in greenhouse gas emission reductions,” he said.

Those reductions can range up to 75 per cent – even reaching net zero if a 35-year life cycle is considered — with energy-use reductions of up to 50 per cent.

All this comes with costs, though, as Smith pointed out, wryly referring to government penchant for awarding contracts only to the “lowest bidder.” He suggested that policy might be showing some cracks with the emphasis on modern work practices, attracting top talent and environmental sustainability.

“I know that you are handcuffed with all to the lowest bidder,” Smith said, “but certainly there might be opportunities to soften that and to move around that.”