Apartment financiers to developers: Do your homework

Developers looking to get their projects out of the ground were out in good numbers to hear real estate lenders discuss financing at the recent  North American New Apartment Construction and Mixed-Use Symposium + Expo at the Metro Toronto Convention Centre. 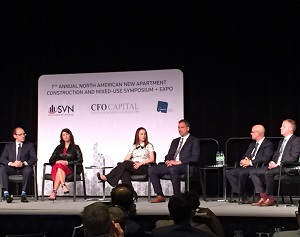 CFO Capital has been dealing with debt structuring, underwriting to the financial model of the lender and sourcing financing in conjunction with banks and other funds in Canada, the United States and Europe since 2004. President and principal broker Mark Kay said the loan-to-cost ratio for most institutions is 75 per cent, with some going up to 80 per cent. Some hybrid structures could go up to 85 or 90 per cent.

Centurion Mortgage Capital Corporation is an interim lender specializing in apartments and student housing, primarily in Canada but with recent inroads into the U.S. Most of its deals are from two to three years, with a maximum of five, and it takes an equity interest in about 25 per cent of the projects.

Vice-president of mortgage investments and joint ventures Stephen Stewart encourages developers to focus on coming to lenders only after doing research, conducting feasibility studies and coming up with a strong idea of pro forma rents and a deep pool of comparables when looking for money.

“We’re reasonable and can be convinced. But if we do it ourselves, I think there’s a tendency to come up with something that may not be quite as aggressive, or get to a level that we might get to if you’ve done the homework and shown us what you think with really good comparables of what you think the rents should be.”

KingSett Capital has $13 billion in assets under management, of which $2 billion are mortgage investments. It primarily does mezzanine financing and is involved with all real estate asset classes.

Executive director of mortgage investments Justin Walton said he places an emphasis on looking at execution risk, which can encompass rising interest rates and hard costs as well as trade capacity issues. He cited a deficiency in skilled trades and noted that larger developers can draw a lot of that capacity out of the marketplace.

“Just because you’re well-capitalized and buy a piece of land, it’s not as easy as it looks,” said Walton. “A lot of pro formas on paper look great, but you have to execute and have a team around you and have good trade relationships. You need all of those things.”

First National Financial LP is Canada’s largest non-bank lender and has been originating and servicing both commercial and residential mortgages since 1988. It has a pipeline of about $1.5 billion of loans in markets of various sizes across Canada.

Assistant vice-president of commercial financing Andrew Drexler said it’s important to know how deep a market is so it doesn’t become overbuilt. Developer liquidity is crucial in order to deal with short-term cash-flow problems and cost increases, he added.

“Net worth is really important, of course, but being able to write a $5-million cheque is significant and is something that would have to be injected fairly quickly. You don’t have years to prepare for this.”

CMLS Financial was founded in 1974 and is one of Canada’s largest independently owned mortgage services companies. Vice-president of real estate finance Jessica Harland, who recently joined the company’s Calgary office after eight years with Canada Mortgage and Housing Corporation (CMHC), said it’s important to add buffers to every expense line as well as to vacancy and interest rates for increased protection. She also looks for personal or corporate guarantees from developers to mitigate risk.

Stewart has seen deals where developers bring general contractors in on deals to make lenders look more favourably upon them. He said fixed-price contracts with strong, reputable contractors are also beneficial.

CMHC works with community organizations, the private sector, non-profit agencies and all levels of government to contribute to the stability of the financial system, facilitate access for Canadians in housing need, and offer objective housing research and advice to governments, individuals and the housing industry.

Financing from banks and other lenders

Gasparro said major banks are actively lending, if it’s the right deal with the right players.

Kay said banks have been staying away from new developers coming into the market. Other lenders, however, are putting syndications together to provide financing to these developers, he added.

“If you have a developer who’s got land and an equity partner or finance partner with construction experience, lenders are going to have a lot more patience with that type of situation as opposed to people who aren’t necessarily as well-versed in the construction piece,” said Harland.

A large part of Harland’s focus is on helping to provide affordable housing for middle-class Canadians who can’t find places to live where they work. She said having “too many cooks in the kitchen” is complicating this.

“I’ve seen that time and time again on these affordable deals. When you’re adding complexities like energy efficiency, accessibility and car share programs — which are all nice to have — they start eroding the financial viability of some of these projects. There’s a very sweet spot in making some of these work — which is why they work very well in some tertiary markets, because the costs are a little less and sometimes there’s not as much involvement from municipalities.”

Gasparro said Kingston, Barrie and Guelph in Ontario, and in many other secondary markets across Canada, have very low vacancy rates and are in need of more rental buildings.

“If you build it right and you’re in the right location, and truly believe you’re going to own this long-term, you’ll do the right thing and build it correctly with the right amenities and finishes, and it will lease.”

Drexler, however, is frustrated that affordable housing shortages remain in Toronto despite support from the federal and provincial governments and programs like Build Toronto which incentivize developers.

“You have a bunch of city staff or officials that do not understand that development is a lot of risk and the margins are so thin,” he said. “They just think that developers are evil people who make so much money, so they’re going to double development charges and quadruple education charges.”

Drexler said these charge increases, combined with rising hard costs and delays in the approval process, are “going to kill development.”