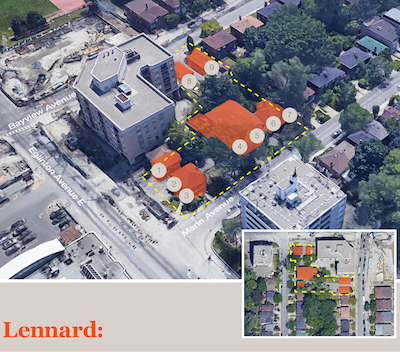 Lennard Commercial Realty compiled this assembly of nine properties at Bayview and Eglinton in Toronto, for sale to Revera. (Courtesy Lennard)

The properties have frontages on Bayview, Eglinton and Mann Avenues and encompass more than half-an-acre of land.

The off-market deal was initiated by the owner of four of the properties. It ultimately involved six different signing partners.

“Revera was immediately interested,” Lennard vice-president of investment sales Noah Schwartz told RENX. “I knew that they were looking for a more urban location and I just thought this was a good fit for them.”

Schwartz credits Lennard partner and broker Will Dempsey and sales representative Nona Kamali for helping to pull all of the pieces together. Once things started rolling, Schwartz said: “We started knocking dominoes over one by one.”

Lennard approached each of the property owners about selling and Schwartz said they “saw the opportunity to participate and get a premium to normal residential value. Everyone slowly but surely signed up.”

Lennard did not provide details about the vendors, individual property prices or the total Revera paid for the assembly.

“The biggest challenge was trying to contemporaneously satisfy the needs of multiple different owners, while also maintaining confidentiality,” said Schwartz.

Assembly deals are becoming increasingly common, as there are fewer single, large land parcels on which to construct a mid- or high-rise building.

However, they’re much more complicated, given how each decision-maker has its own needs, timing, perception of value, and related stakeholders, all of which must be managed.

Schwartz does his best to educate stakeholders, where appropriate, and communicates with them as effectively as possible.

“Many assemblies fail because expectations, especially around valuations, are mismanaged,” he said. “Perseverance is a really important part of this.”

Most of the transactions Schwartz is involved with are off-market. They’re initiated either by buyers who identify a property of interest and ask him to quietly approach the owner, or by sellers who ask him to find an appropriate purchaser.

“I am fortunate to have strong relationships with both buyers and sellers who trust in me to handle their affairs privately,” said Schwartz.

“In many cases, the sellers can appreciate, or even prefer, a quieter transaction process so to minimize the disruption in their daily business operations as real estate is often not their primary business, although it is likely their greatest value asset.”

The company is celebrating 40 years in business during 2020.

It was founded in Calgary in 1980 by Gordon Lennard, and its Toronto office opened in 1983. Jim Russell joined the company a year later and moved to Toronto in 1986 to build Lennard’s team.

Russell was joined shortly thereafter by Andy Baker and Daniel Hunt, and the trio purchased the company in 1999.

A Calgary operation is still running as Lennard Corporation, which owns and operates First Executive Centre in the city and is headed by Beth Lennard.

Lennard has grown exponentially in recent years and now employs approximately 100, including agents and support staff.

“We’re attracting seasoned top players in commercial brokerage as well as agents starting off in the industry who join our mentorship programs,” said Schwartz.

Lennard’s research tools, sales support team, corporate culture and “industry-leading compensation packages” make it an attractive place to work, according to Schwartz, who’s in his seventh year with the company.

“We’ve had a successful 40 years because we operate based on trust and integrity.

“We have a progressive culture with an ability to adapt to changing market conditions and we work together in collaborative teams to provide advice and industry leadership as the real estate landscape evolves.”