Traffic delays caused by construction of Toronto’s Eglinton Crosstown light rail transit (LRT) system have been a headache for drivers, but it will become a godsend for residents and businesses along the corridor once it’s finally completed in the next three or four years. 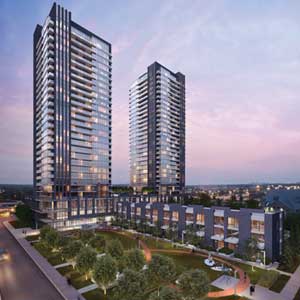 Lindvest is banking on a boom around Eglinton Avenue and Don Mills Road and will begin construction of its Sonic Condominiums project there early next year.

“This is an established neighbourhood that’s been waiting for transit to give it a pop and some freshness,” said Lindvest vice-president Michoel Klugmann.

Sonic’s site already has a transit score of 70 due to being adjacent to the Don Valley Parkway, which allows easy access to downtown, the Gardiner Expressway and Highways 401, 404 and 407. The development is located across the street from the future Ontario Science Centre Metrolinx station and will be close to another station near the Aga Khan Museum, both of which will provide a faster way to the Yonge subway line, as part of the 19-kilometre LRT line.

The site also has a walk score of 75, with a Real Canadian Superstore and Joe Fresh across the street and trails of the Don Valley system providing access to parks to the north and south.

Sonic pre-sales began late last year and suites are more than 50 per cent sold. The first phase of the multi-part project should be ready for occupancy in 2019 and, when totally completed, should have approximately 650 units.

Phase one will be a 28-storey tower with a three-storey podium designed by Page + Steele/IBI Group, with interiors being handled by U31. The third floor will feature a party room with a bar, a dining room, a fitness room and yoga studio, a games room with billiards, and steam rooms with men’s and women’s change rooms. The main floor will include a community room, meeting booths, a music and theatre room, and a pet washing area.

A similar structure will come in phase two and a fourth floor outdoor terrace with private cabanas, seating areas, an outdoor barbeque and dining area, lounges and greenery will sit between the two residences.

“Downtown living at a midtown price”

“We have downtown-style amenities and very high quality designed kitchens, washrooms and amenity spaces, as well as the exterior design of the building,” said Klugmann. “It’s downtown living at a midtown price.”

Everything will be situated in a park-like setting designed by landscape architect NAK Design Strategies that will include a figure eight walking path, children’s playground, seating areas, exercise equipment and a water feature.

The neighbourhood and variety of suite sizes are attracting interest from both young professionals and families, and Klugmann said there are renters in the area looking to own because there hasn’t been much new higher end high-rise product available in the area.

Lindvest, a development organization founded in 1998, is part of the H&R family of companies that’s been building homes in southern Ontario for some 60 years. Toronto-based Lindvest’s focus has been on the Greater Toronto Area.

“The people who are here want to stay here and people who aren’t want to move here,” said Klugmann. “It’s a great place to live and it’s very welcoming and safe.”

Lindvest’s recently completed projects include the B.streets condominiums in Toronto, Spring Valley Junction in Brampton, Ont. and The Grove in Richmond Hill, Ont. Its current developments are the Grand Cornell Brownstones condo townhomes in Markham, Ont. and the Gracefields community of single family homes near Newcastle, Ont.

Aside from Sonic, Lindvest’s other upcoming projects are: executive townhomes as part of phase three of Aurora Glen on Leslie Street in Aurora, Ont.; and 88 modern stacked townhomes that will form the second phase of The Brownstones at Westown, located at Weston Road and Sheppard Avenue in Toronto.