It was appropriate Edgefront REIT (ED.UN-X) and Nobel REIT (NEL.UN-X) announced their intended merger on February 14, a spot on the calendar better known as Valentine’s Day. 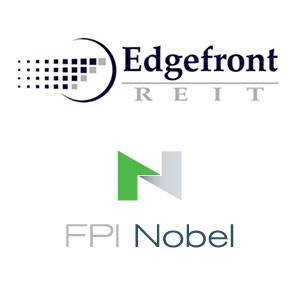 It turns out the Western-based industrial REIT and Quebec-focused multi-sector REIT have been in a heavy-duty courtship since the summer. Serving as the matchmaker of the corporate romance was Nobel’s majority shareholder, RFA Capital.

“One thing led to another”

“We hit it off and we started talking and they introduced me to Jean (Teasdale, Noble’s president and CEO) and we hit it off,” explained Edgefront president/CEO Kelly Hanczyk. “One thing led to another and we thought it was a fantastic idea once we looked at each other’s portfolio to combine them.”

Hanczyk, who along with Teasdale will serve as co-CEO of Nexus REIT, said a major attraction from his side was an opportunity to “high-grade your portfolio” by adding Noble’s properties.

“The quality of their assets is fantastic. That complements our long-term leases with strong covenant tenants and contractual rent increases,” Hanczyk said. “So when you mix those two together, the combination is really compelling.

“For us, the Nobel has portfolio has growth opportunities in it while ours is so stable.”

Hanczyk said Edgefront also gains a committed major shareholder in RFA Capital, which is “very active and want to see the REIT grow” and have a pipeline of real estate assets to fuel future portfolio growth.

The combination of the two portfolios through the creation of Nexus REIT – and a better growth story – should put the trust on the radar of more investors than the low profile the two trusts individually had, Hanczyk hopes.

“We were both junior REITs and it is no question that it is a struggle for the smaller REITs. You need to be creative and intelligent in the moves you have made.”

It will also be something of a departure for the uber-conservative Edgefront. “We have grown it this far without really tapping the capital markets, having vendors take back units for transactions and this is just the next avenue for us,” Hanczyk said.

“It puts us over $100 million market cap, with a very good pipeline of acquisitions, solid quality acquisitions in the future. So I just think it hits all the chords. We internalize management . . . all the blue-chip REIT factors.”

Gaining speed as a growth REIT

With the abandonment of Edgefront’s acquisition strategy of asking sellers to become shareholders as well as tenants, Hanczyk sees a dramatic acceleration of growth for Nexus.

“I would think that we have entered a phase where we will be a growth REIT.”

How quickly? “We have the pipeline available and there are a number of different assets. It is going to depend on our ability to raise equity, whether it is privately or though the capital markets.”

The REITs say Nexus will be accretive to AFFO per unit for the first year following the transaction, based on additional organic growth and lease-up of a downtown Montreal office property.

It should also save in overhead costs, the current doubled public operating costs and internalization of management.

The combination will be backed by two private equity players with strong real estate pipelines. Edgefront has long been backed by TriWest Capital Partners, a private equity firm with about $1.3 billion in assets under management.

Noble majority shareholder RFA Capital Partners is a real estate private equity firm “which has invested in over $15 billion of commercial mortgages and real estate since 1996” according to the Nexus investor presentation.

RFA will own about 20 per cent of the Nexus share base with TriWest holding a little less following the corporate combination.

“They are both fantastic guys to work for and work with, they have real estate and they are very well-connected right across Canada so we get to see a lot of different opportunities.”

Edgefront currently is a single-tenant, industrial-focused REIT with 20 properties located throughout Canada that is 100% occupied. Noble touts itself as a “growth-oriented” REIT with 16 commercial properties, 15 of which are located in the Greater Montreal Area and one in Ottawa/Gatineau.

Following the merger, on a net operating income basis, the REIT will be approximately 77% industrial and 16% office with the remainder retail and mixed-use.

Over time, it is expected the industrial component will shrink, with growth in other sectors.

Geographically, the Edgefront CEO expects further growth in Quebec. “I would like to see us in Ontario, it is just the cost base” of properties there that is a limiting factor.

“There are plenty of opportunities in Ontario,” Hanczyk said. “I would love to see us expand, but you will see us continue in Alberta, B.C. and Saskatchewan, being national right across the board. We will have exposure to all provinces.”

What’s in a name?

Coming up with a new name for the venture can be credited to a Edgefront board member.

It was a more involved process than Hanczyk initially thought it would be considering the fact that the boards were not only combining two very different companies but ones that operated in different languages in very different home provinces.

“We were toiling with names and we wanted to keep the “N” because Noble has a lot of the properties branded with the “N” so a simple color change. We kept the Edgefront colours and Nexus has the meaning of coming together.”

It is also a solid bilingual name.

“That is the interesting part, you have to look at it with an English and French perspective,” he said. “Some names just don’t work well when you look at them both.”