Longueuil seeks $3B in downtown investment

Longueuil plans to have a major new downtown by 2035 that will be built around its existing Métro station. 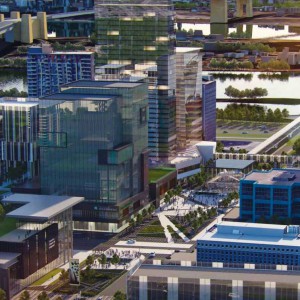 Artist’s conception of downtown Longueuil as it could appear by 2035. (City of Longueuil)

“It’s the type of project that comes only once in a lifetime,” Longueuil mayor Caroline St-Hilaire told a business audience at the Montreal Board of Trade’s recent Strategic Forum on Major Real Estate Projects.

The downtown will be located near the St. Lawrence River and Jacques Cartier Bridge.

Tech firms such as SherWeb and financial group SSQ have committed to building new headquarters in the downtown. Last year, SSQ opened its new Tour SSQ head office near the Longueuil Métro, a 12-storey, 215,000-square-foot building built at a cost of $70 million.

The city on the South Shore of Montreal has a population of 239,000. Its existing version of a downtown is home to the 30-storey Place Charles-Le Moyne, a hotel and a satellite campus of the Université de Sherbrooke and the Longueuil bus terminus and Métro station.

The Métro station is the most heavily used during rush hour, while its bus and subway transit hub is the largest of its kind in Quebec with more than 75,000 passengers daily. Montreal is nine minutes and two Métro stops away via a subway tunnel under the St. Lawrence.

The city is banking on construction of a new Métro station although no official announcement has been made.

Longueuil’s new downtown will be much more accessible – with walkways crossing nearby highways and providing access to the old quarter of Vieux Longueuil, St-Hilaire says.

It will be within walking distance of school, work and home, with plans calling for 8,500 new housing units ranging from luxury condos to seniors housing.

There is the potential for 1.5 million square feet of office space in the new downtown. Plans also call for a cultural complex that will house theatres and the city’s orchestra and a public square on the site that will accommodate festivals and other events.

The location is one of the last riverside sites available in the Montreal area. About 4.5 kilometres of riverside parkland are planned for the site, says Marie-Chantal Verrier, deputy general manager – sustainable development for Longueuil.

Completion dates for the various phases of the new downtown have not been announced.

“It’s the most audacious project in the history of Longueuil,” Verrier says. The new downtown project proves “Longueul is not just a Métro station.”