With better GO train service and an improved transportation network, the Hamilton/Niagara region is increasingly becoming an attractive option for homebuyers priced out of Toronto. 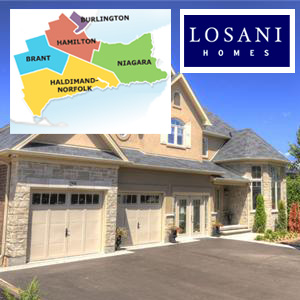 “Pricing is going through the roof when it comes to the GTA (Greater Toronto Area), but there’s still great affordability out there,” said Fred Losani, chief executive officer of Losani Homes, which has built more than 6,000 homes in 100 communities.

“You just have to take a few steps outside of the greater GTA and there are phenomenal opportunities that are incredibly affordable and provide a huge range for individuals who are looking for quality of life.”

Losani reports that more than 30 per cent of purchasers in its communities are from central Toronto, compared to 10 per cent the year before.

RE/MAX’s 2015 housing market outlook report found that the westward commute is more prevalent in the 25-to-44 age group, as it’s more sensitive to house price changes. The move is also popular amongst empty nesters whose large GTA homes have gained huge value over the years. They’re looking to sell and put the profits towards retirement and new homes further west.

New 3,000-square-foot single family homes on 40-foot lots are very hard to find in the GTA and in the few places where they exist they’re probably in the $2.5-million range, according to Losani.

“If you’re in the GTA, your choices for housing are likely low-rise townhouses or you’re going vertical with mid-rise or high-rise condo buildings,” he said. “Opportunities to be able to move into a variety of housing within the greater GTA just aren’t there any longer from an affordability perspective, which ties into the supply side.”

Losani is reaching out to these people and letting them know what it has to offer in a variety of ways, including print and online advertising, search engine optimization efforts, a large digital display board at its Hamilton office that’s easily visible from the Queen Elizabeth Way and, starting this fall, advertising on digital boards along the Gardiner Expressway.

“Once we end up communicating with the purchaser, if we can’t satisfy them on one site they don’t leave,” said Losani. “They’ll ask about other locations that we’re in and look at them.

“At the end of the day, even though real estate is all about location, location, location, oftentimes when you start with product and pricing first and then look at the alternatives that are available, you can do more of an apples to apples comparison.”

Losani said his company has opened eight communities since last fall and all of them have sold out in two to four weeks.

It just opened one in Paris, a town of some 12,000 people in Brant County, where 41 per cent of the buyers came from the GTA.

“It’s a beautiful town,” said Losani. “It’s on the Grand River and near conservation areas.

“It’s easy to walk around the core and there are great restaurants and pubs everywhere. It just blows me away how attractive it is to individuals coming from the GTA, but it’s a great opportunity to buy a single family home.”

Hamilton’s not emerging; it’s on the map

The first phase of Losani’s Central Park community in Hamilton will open with 74 single family homes and 140 freehold townhouses on Oct. 18. Prices will begin in the low $300,000s. The remainder of the 1,050-unit development that will follow will be comprised of townhouses and mid-rise condominiums.

It will be built around a park next to the protected Eramosa Karst and close to a new high school and retail power centre as well as public transit and expressways.

“Hamilton’s not emerging,” said Losani. “Hamilton’s on the map in the biggest way.

“That’s why we’ve tried very hard to ensure that we’ve looked at opportunities beyond Hamilton because we knew it was coming and now it’s certainly here. We’ve tried to ensure that we’re in a great position in these alternate communities. In Niagara, Kitchener-Waterloo, Brant County, Brantford and Paris, we’ve been there for 20 years.”

A new 900-home community featuring townhouses, mid-rise and high-rise buildings on the Grimsby waterfront has been drawing attention from all over Hamilton/Niagara even though it won’t be brought to market until late next year. Losani also has future developments planned for Brantford, Winona and St. George.

Ontario’s provincial government undertook a review of the Growth Plan for the Greater Golden Horseshoe, the Niagara Escarpment Plan, the Oak Ridges Moraine Conservation Plan and the Greenbelt Plan last year and came up with proposed changes for the four plans. Losani would like to see land restrictions loosened to increase supply, which he believes could help curb spiraling home prices in the greater GTA and Golden Horseshoe regions.

“We don’t have enough supply out there and the provincial government holds the key to the boundaries. There are so many opportunities for them to be able to release a supply of land that there’s no need for it to be in the Greenbelt. There are farm regions that aren’t being farmed. There are plots of land that are right beside dense urban centres that are vacant.

“The impact will be immediate and be very positive for the general population.”