The Montreal market is growing for the first time that Cushman & Wakefield’s new managing director of Quebec operations can remember. 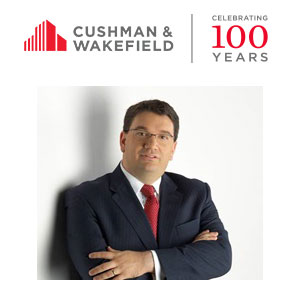 “It’s an exciting time in the city,” says Luciano D’Iorio, who joined Cushman & Wakefield in February after a career as a partner at Terramont Real Estate Services in Montreal.

“I can’t even believe I’m saying that to you because for the last 18 years I’ve been saying maybe the opposite,” he says. “We’ve always been talking about Montreal as a sort of musical chairs town. But we’ve seen growth in the last couple of years. As I look out my window, we have cranes out there now and there’s things happening”

Cranes on the Montreal skyline

D’Iorio points to the recently completed 26-storey Tour Deloitte and 27-storey Maison Manuvie (slated for delivery in 2018) as examples of new downtown towers that have come onboard “after stagnation of 10 or 15 years.”

While “the elephant in the room is always the political question, I think there’s a little bit more political stability over the last few years,” he adds, noting the sovereignty issue is rarely being discussed.

The recent activity can partly explained by the fact tenants are looking for buildings with more efficient floor plates and employee work spaces, he says.

D’Iorio says Cushman & Wakefield in Canada and Montreal “have some wind in their sails and it’s a group that is committed to excellence. I wanted to be part of a team that had that.”

At Terramont, he worked on deals for clients such as Bell Mobility, City of Montreal, Equisoft, National Bank, Hydro Quebec, La Presse and TC Media. “I just saw this as a great opportunity,” he says of his new job. D’Iorio sold his stake in Terramont and says he left on good terms.

Filling a void at Cushman and Wakefield

Cushman & Wakefield had been without a managing director for about a year in Montreal and the office was handled by director of operations George Manousos.

The company has 31 brokers in Montreal in offices downtown and in suburban Saint-Laurent and “I’d like to see some growth in certain areas of the business,” D’Iorio says. “I don’t want to grow just to grow.” He’d like to add to the industrial, capital markets and suburban office groups and notes the company is committed to giving more resources to the Montreal market.

According to D’Iorio, Cushman & Wakefield is considered one of the top three brokerages in the city. “Certainly on the tenant rep side, we’re number one.”

The bulk of Cushman & Wakefield’s business in Montreal is in office tenant rep, followed by landlord representation and industrial. It also has some Fortune 500 customers on the retail side that D’Iorio would not name.

A hub for smart jobs

He says the city’s pool of educated people from its four universities and fairly young workforce are “a sign of the times for the city.”

New construction has given tenants an increased range of options, notes Cushman & Wakefield’s latest report on Montreal’s office scene from the fourth quarter of 2016.

The report pegs the overall office vacancy rate at 14% compared with 12.3% in the fourth quarter of 2015. However, unemployment in the city has dropped from 8.6% to 6.7% during the period and stands below Canada’s unemployment rate of 6.9%.

The city is increasingly recognized as a hub for smart jobs with Google and Microsoft having announced investments in artificial intelligence. However, smart industries are mostly not labour-intensive, and will not absorb Montreal’s office space surplus by themselves, the report says. As a result, Montreal will remain a tenants’ market for at least the medium-term, the report says.