A former convent being transformed into luxury condos by Corev Immobilier in the tony Montreal su...

A former convent being transformed into luxury condos by Corev Immobilier in the tony Montreal suburb of Outremont will include an indoor, vertical farm. 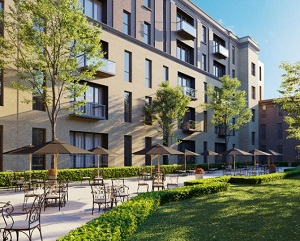 Corev Immobilier is building Le 1420 luxury condos in the Montreal district of Outremont. Among other amenities, the building will feature a working, indoor vertical hydroponic farm. (Rendering courtesy Corev Immobilier)

The farm isn’t the only distinctive feature of Le 1420 Boulevard Mont Royal, which has several innovative touches as well as offering buyers the ability to create a “made-to-measure” condo for themselves.

“It’s the sign of the times,” says Sabine Karsenti, sales director of the 180-condo unit Le 1420, who calls the indoor farm “basically a step toward the future.”

The planned 1,200-square-foot vertical farm will provide roughly the equivalent of three acres of regular farming. The indoor hydroponic farm will use a high-tech LED lighting system and be owned and managed by an outside company.

Produce that is grown will supply a restaurant in the building which will be open to condo owners and their guests. Excess production will be offered for sale to owners interested in organic produce and to outside clients.

“This is what we’re heading towards,” says Karsenti. “We can’t manage our food and import it as we do right now. We have to go greener; we have to go more aware of what’s going on, so it’s just a normal thing to do.”

The indoor farm will require a permit from Outremont, which the developer will soon apply for, she says. (When properly installed, indoor hydroponic units do not create humidity and do not require much electricity.)

Several attempts have been made to develop the former mother house of the Soeurs des Saints Noms de Jésus et de Marie (Congregation of the Sisters of the Holy Names of Jesus and Mary). The building was constructed in 1925 and once housed about 500 nuns.

The nearby Université de Montréal bought it from the nuns in 2003 for $15 million, planning to use it for classrooms and other purposes, but abandoned those plans five years later.

Subsequent owners announced plans to convert the property, which flanks Mount Royal, into condos, a transformation that was opposed in vain by several Outremont citizens.

After several changes in ownership – including to a firm that became embroiled in the Charbonneau Commission on corruption in the construction industry – the convent was acquired by Corev Immobilier. It is investing about $140 million on the redevelopment.

Corev has converted other older properties

Corev is also building the 40-storey TOM Condos on Union Avenue in downtown Montreal and has converted older properties like Le Thémis in Old Montreal and Le 376 Redfern in Westmount.

About 1,000 potential buyers registered on a teaser site after pre-sales of Le 1420 began last spring. So far, 25 per cent of the project has been sold, Karsenti says. Demolition work is underway on the 300,000-square-foot property and construction should begin this spring, with completion slated for summer 2020.

The condo cost per square foot, before taxes, ranges from $500 to $1,000 and units vary from 900 square feet to “whatever you want,” Karsenti says. “We had people combining two units to make a 7,000-square-foot condo, so anything is possible here. It’s a made-to-measure project.”

Buyers range from single doctors and families to young retirees. They hail primarily from Outremont, Westmount and Nuns’ Island.

Sold with marketing materials that state “welcome to the sublime,” the condo development includes a “spectacular” refurbished chapel that will be available for weddings and other events.

“It’s hard to leave anyone indifferent,” she says. “It’s not something you see in a new development.”

Other common areas include the restaurant, a lounge, two interior courtyards, an indoor pool and gym. There will be 24-hour valet parking, security and underground parking. Ceilings are 12 feet high on average.

Karsenti says prices are competitive with other high-end condo projects such as the 18-storey Four Seasons Hotel and Private Residences Montreal, set to open at the end of the year in the downtown. The more-than-$200-million project by Carbeonleo (the company behind the Quartier Dix 30 project), includes a 166-room hotel and 18 condos, connected to the Ogilvy and Holt Renfrew department store.

Oak doors given to antiques dealer

The building is “iconic,” says Karsenti, who lives a block away. “It’s got a soul to it; it’s got such a presence.”

The location “is amazing” because it’s at the foot of a forest of Mount Royal and will have direct access to its trails. “You can go for walks on the trails, you really feel like you’re in the countryside and you’re five minutes away from downtown as well.”

About 1,000 old oak doors and windows in the building have been given to Spazio Architectural Antiques, a Montreal antiques showroom, with the requirement 25 per cent of the proceeds be given to Habitat for Humanity.

While the facade of Le 1420 is classified as having heritage value, there is nothing inside aside from the chapel and the main staircase that is outstanding in terms of architectural design, Karsenti says. “We’re not destroying anything that had any value.”