Pinnacle International, already involved in several major developments in the Greater Toronto Area, is about to launch the first stage of its most high-profile mixed-use project. 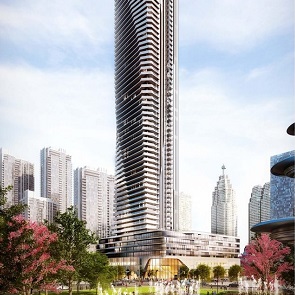 “We’re raring to go,” said Pinnacle vice-president of sales and marketing Anson Kwok. “We’re going to have four construction sites in full swing, so it will be a busy 2018.”

Sales for 65-storey condominium tower The Prestige at Pinnacle One Yonge, at the foot of Toronto’s most iconic street, are about to begin. Construction is also expected to begin on the master-planned, mixed-use site during the first quarter.

The first condo building will be followed by 95- and 80-storey condo towers as well as two office buildings, a 50,000-square-foot community centre, retail, a hotel and a public courtyard. The site will also act as a gateway between downtown and all of the development activity taking place just to the east.

“We want to get all the pieces in that really make that community one that you can really live, work and play in,” said Kwok. “It’s going to have that scale and variety of uses that keeps the heart pumping all of the time, versus the typical office parameters where after six o’clock it becomes dead.”

In the meantime, only about a dozen of the 469 units remain unsold at the 48-storey Pinnacle Grand Park 2 at 3995 Grand Park Dr. in Mississauga after residents started moving in during the summer.

The 26- and 23-storey buildings of Amber at Pinnacle Uptown on Hurontario Street near Eglinton Avenue West in Mississauga are pretty much sold out. They’ve both been topped off and interior work is taking place on one, while the exterior is being finished on the other. Occupancy is expected in June.

Sales have begun for one of the two Perla Towers at Pinnacle Uptown, part of the same master-planned community. Excavation should begin within a few weeks.

Pinnacle’s 36.5-acre Uptown community was launched with Crystal, a 463-unit condo which welcomed its first residents in early 2015. The site is also home to The Marquee Townhomes, a 100-unit development completed in 2016. Pinnacle Uptown will feature 10 residential towers once completed.

“That community has evolved quite a bit in the last five years, and Perla will be the next addition to a neighbourhood that keeps on evolving,” Kwok said of the former farmland. “By the summer, we’ll have about 1,100 units and we’re giving a 15-acre park to the city.”

Cypress at Pinnacle Etobicoke, a 25-storey, 274-unit condo, will be the first building erected at a site at 5415 Dundas St. W., between Kipling Avenue and Highway 427. The property, within a 10-minute walk of the Kipling subway and GO Transit stations, includes 12,000 square feet of retail at grade and 40,000 square feet of office space.

Construction is expected to start in February after a Bowlerama location closes and is demolished, along with a now-vacant office building.

“We haven’t released the whole building yet, but we’re in pretty good shape and are comfortably ready for construction,” said Kwok. “There are a lot of floors that we haven’t finished releasing yet, but we’re definitely happy with where we are.”

There have been early discussions with pharmacies and small grocery stores for the retail space in the building. Pinnacle is approved for seven other buildings in addition to Cypress, and the property will also include a one-acre park. The company aims to create an all-encompassing, master-planned, mixed-use community with residences, big box stores and more office space.

“There’s definitely an opportunity, but it’s been one of those neighbourhoods that people saw as a fast-food alley,” said Kwok. “People didn’t really see it as a place to live, and our goal is to change that.”

Excavation for underground parking for The PJ Condos, at the corner of Pearl and John Streets in downtown Toronto, is nearing completion. The 41-storey condo will have 373 units and marks the second phase of Pinnacle’s development in the Entertainment District after The Pinnacle on Adelaide.

The mixed-use project will also include a five-storey podium for commercial use.

Next year, Pinnacle will launch the three-tower Pinnacle Toronto East condo project that will have about 800 units in the vicinity of Sheppard and Warden Avenues. It will be the company’s first development in Scarborough.

Kwok said Pinnacle is being forced to look farther afield to build the master-planned communities it’s most interested in.

“We’re hoping that trend continues, but finding the right land for it is more challenging now. Most projects in the city are single-building sites. We’re happy to entertain new opportunities, but in the core area it’s more limited.”

Pinnacle’s other focus is on building bigger condo units of 900 square feet or more.

“I think we have a lot of people in the city who are first- or second-generation individuals who live in condominiums and started off in one-bedrooms or one-bedroom-and-dens and are going to start growing into two-bedrooms and three-bedrooms,” Kwok explained. “We’re doing our best to try to meet that demand because everyone eventually collects more things.

“People will outgrow their space and we’re trying to make sure that people can live somewhere bigger than what we’ve seen a lot of people build.”

Vancouver-based Pinnacle has been involved in the development, design, construction and management of condos, hotels and commercial buildings for more than 40 years.

Its projects are in Greater Vancouver and Toronto as well as in San Diego, where it built the city’s tallest residential building, Pinnacle on the Park.