The drivers behind the need for new office space have been evolving over the past few years, as have the types of spaces they’re looking for, presenting challenges for landlords. 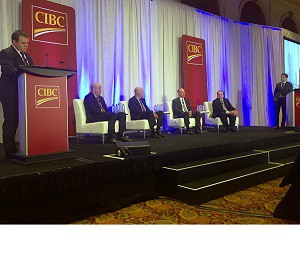 “Owners have to do whatever is necessary” to give tenants what they want, Allied Properties REIT (AP.UN-T) president and chief executive officer Michael Emory said during a panel discussion at CIBC’s 22nd annual real estate conference on March 30.

“It’s not voluntary. If you don’t, you’ll fall behind.”

Allied owns, manages and develops urban office environments and specializes in modernizing former light industrial spaces while still maintaining their original character. Its portfolio is worth more than $5 billion.

Emory stressed that the three primary things Allied tenants are looking for are “good air, good natural light and configurations that facilitate open planning,” and that “it’s incumbent on us to make whatever investment is necessary to afford them those attributes.”

Companies also consistently ask for terraces and Allied has secured several tenants by providing them, even though Emory said there are so many restaurants, bars and other amenities around most of his REIT’s buildings that the occupants usually make little use of them.

What Brookfield tenants are looking for

President and CEO Jan Sucharda said his company has been receiving more requests for bicycle storage and showers for people who use pedal power or jog to work. Smaller and mid-size firms are also looking to share meeting spaces with other tenants so a board room of their own isn’t sitting empty much of the time.

“We have a hybrid evolving with a number of tenants, where they come in and want a combination of traditional space and some areas that could be considered communal space, like a kitchen and staff lounge that would be open concept and open ceiling,” said Sucharda.

“It’s a way to change the culture of an organization.”

While companies attempting to reduce costs may look at reconfiguring and reducing office space to make it more efficient, it generally doesn’t mean they’re cutting employees but are raising head counts to more than one per desk.

More firms are employing the office hoteling format, in which workers dynamically schedule their use of desks, cubicles and offices.

Slate and KingSett trying to cater to tenants

The REIT has a portfolio of 35 office properties in urban and suburban locations, and CEO Scott Antoniak said his tenants desire parking and access to mass transit.

“There’s no universal solution for all tenants,” said Antoniak, who believes owners have to be flexible and shouldn’t dictate what a space has to be, but should work with tenants to see what they want.

KingSett Capital executive managing director Joe Mazzocco said access to public transit is also a priority for his company’s tenants, along with options for expanding.

“Tenants want to know that as they grow their business they can do it in the same space or the same building,” said Mazzocco, whose national private equity real estate investment firm manages assets of $6.7 billion in a $9.2-billion portfolio.

Technology companies are undergoing the greatest expansion at KingSett properties, according to Mazzocco, followed by non-banking financial institutions and healthcare and education tenants.

Sucharda said more tech, communications and media companies are moving from older brick-and-beam structures to more traditional office buildings, while Emory said more conventional office users such as banks are starting to adopt the types of properties that Allied works with.

Toronto is Canada’s key office market and shows no signs of relinquishing that title, though the tech sector is growing in importance in Vancouver and Montreal and is likely to become a more important player in Calgary.

All of the panelists’ companies own assets in Calgary and they expect its office market to recover, though the consensus is that it will take time. Sucharda said there’s been a “flight to core” in Alberta’s largest city as some companies are taking advantage of low downtown rents and consolidating their operations.

“Prices in Alberta have fallen materially so, if you’re looking for somewhere that you can make a big bang, Alberta is that spot,” said Mazzocco, noting the importance of making decisions on a risk-adjusted basis in a volatile market.

“While it has the highest potential upside, there’s also risk to it.”

“We would be prepared to consider acquiring assets in Calgary that fit our investment focus, but there are simply no opportunities available,” said Emory. “There is no apparent distress in the ownership base of the sort of assets that we focus on.”