I’m about to really date myself here, but as a kid do you remember going to the grocery store and watching the cashier type each item into a till? 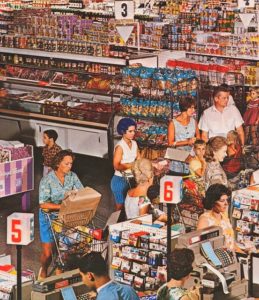 If the inset picture is a confusing one to you, let’s take a trip down memory lane. Then, a quick look into what the future holds for the grocery retail experience.

I grew up in a small town so it’s not overly surprising my little community might have been behind the ball on the revolutionary retail staple known as bar code scanning.

The practice began in a supermarket in Troy, Ohio in 1974. According to this Globe and Mail article, some Canadian retailers didn’t convert their practices until the ’90s.

We had two grocery stores in my small town and I remember one switching sooner than the other.

In those days, cashiers were accompanied by bagging assistants on all tills as the process took much longer to key in than today’s scanners.

And if you’re ever wondering, they typically used all of those tills. Today, we generally see only 50 per cent occupied any time you enter a Sobeys or Safeway.

The internet offered the next revolution in the retail sector. In grocery, it’s most relevant in the click-and-pick-up phenomena.

There’s no need to spend time walking the aisles visually scanning for what you require. You select what you need at home and it’s ready for you when you arrive!

Retailers like Superstore already offer online sales with convenient pick up. Walmart has also dabbled in this feature.

In a move similar to “scan your own” stations in many stores, Amazon Go in Seattle is experimenting with a full shopping experience that allows you to scan directly at the aisle and walk out with items.

This variation of an in-person click and pick up still operates on the honour system and hasn’t quite been perfected yet, as witnessed by the attendants hovering over customers in these stores.

The final frontier, as predicted by some in the industry, will be voice commerce.

Imagine this: you’re standing in your kitchen and notice you’re low on bread. How handy your Amazon Echo is nearby and faithfully waiting on your every command.

Now that Amazon has bought Whole Foods Market, the Echo technology could make it possible for you to order your groceries by voice.

If you don’t have an Echo, don’t worry. I don’t have one yet either. I find it a little intrusive myself.

But with automation expanding in all aspects of our lives day-by-day, it’s surely not too long until we find ourselves living like George Jetson.