The $100-million redevelopment of the landmark Manulife Centre – too rich to term it a renovation – has been years in the making but in reality, the timing couldn’t be better. 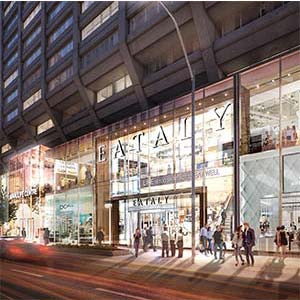 The ambitious project, which will see the venerable building at Toronto’s Bay and Bloor southeast corner reimagined with a glass façade and 35,000 square feet of new retail space, comes at a time when the area is booming with a mix of high end retail and new, high end residential developments.

“The timing is absolutely perfect because as you know there have been some major condo developments further along Bloor, there are some major ones just coming onto the market with Great Gulf and One Bloor is now in the ground and there has been some major enhancements of the retail corridor in Yorkville as well as Bloor,” said Kevin Adolphe, president and chief executive of Manulife Real Estate.

The 44-year-old Manulife Centre, has long been at the heart of Toronto’s high end fashion district, with the likes of Bretton’s, Creed’s and Harridge’s as early luxury retailers. That trio is long gone but Manulife has strived to keep the complex current through a series of renovations.

The main buzzmaker of the latest renovation, beyond the budget, is the announcement that upscale Italian food and drinks chain Eataly will open its first Canadian outlet at the north frontage of the building, where most of the physical expansion will take place. The renovation is scheduled to be completed in early 2019.

Manulife considered a number of potential new anchors for the remade complex, but it was deep connections with the multi-billion dollar Weston family empire (owners of Holt Renfrew and Loblaws among other businesses) that first put Eataly on the radar. Loblaw operates in the Manulife Centre and Holts is a tenant in Manulife Place in Edmonton while the Westons will be partners in the Toronto Eataly venture through Selfridges Group.

“There are various points of contact plus there are also personal relationships at various levels in our organizations,” explained Adolphe. “Though a series of conversations we started talking and it is taking some time to get all these things lined up.” He added that discussions with Eataly and its partners have gone on for about two and half years.

Despite the explosion of retail and residential in the Bay Bloor area, Manulife identified a distinct lack of upscale dining destinations which it hopes to fill with Eataly.

“You go to other major cities in the world, I have lived in London, Singapore, Australia, visit New York, Boston, and you go to those cities and you compare the options in terms of the core versus Toronto, there is no comparison,” said the Manulife chief.

The Italian chain, which also has locations in the U.S., Japan, Dubai, Turkey, Brazil, and Italy, was not the only potential new candidate for the revamped centre.

“We did evaluate others and there were other configurations,” said Adolphe.

“We almost went down another path and this opportunity came to us and we think that in the end this is the best opportunity to create the greatest value enhancement to this project.”

Manulife is able to add what amounts to a 35,000 addition to the Toronto centre largely because of its footprint, it is physically well set back from Bloor Street to the north.

Unlike First Canadian Place at Bay and King, the Bay-Bloor area is turning into an all-hours work-shop-dining hub in the city and Manulife is aiming to play a major role in that evolution.

“This is going to really transform that corner and the area. All those condos, there is going to be demand for this type of amenity in the area. I think the Weston family clearly understands that because they are key partners.”

Among the mixed use properties in its portfolio, the only other potential candidates for a similar expansion are the 50%-owned First Canadian Place complex in Toronto’s financial district and Manulife Place in Edmonton.

Any ambitions for Edmonton likely have to wait until the dust settles from a current wave of development in the provincial capital. “As you know Mr. Katz is leading a major redevelopment in the Edmonton core with the new arena and what is going on there. So we are going to wait and see there.” The Katz Group, owned by billionaire Daryl Katz, is in the midst of a massive development built around a new arena for the Edmonton Oilers NHL team that includes office and residential towers, a luxury hotel and retail.

As for potential expansion destinations for Eataly in Canada, Manulife executives said that Montreal is a logical next stop given the Westons’ ownership of the Ogilvy department store occupying a coveted block on the city’s shopping strip on St. Catherine St.

A history of major renovations

This is not the first major renovation for the Manulife Centre, noted Peter McDonald, vice-president of asset management with Manulife Real Estate, who headed up the negotiations with Eataly.