Marcus & Millichap is carving its niche in Canada

Since launching its first Canadian office in 2013, Marcus & Millichap has been doubling its busin... 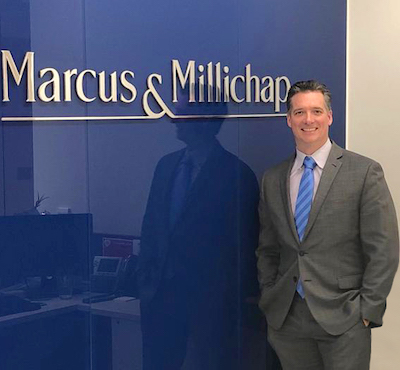 Since launching its first Canadian office in 2013, Marcus & Millichap has been doubling its business each year in the city. It’s on track to do the same in 2019, says vice-president, Toronto regional manager and broker of record Mark Paterson.

“We’re attracting better talent, our brand is starting to be recognized, we’re doing more significant deals and we’re not getting the crumbs anymore,” said Paterson, whose father developed shopping centres and got him interested in real estate from an early age.

Looking for the next step in its evolution, it expanded into Canada with one agent in Toronto that same year.

Paterson, who joined the company as a senior associate in 2014, told RENX Marcus & Millichap’s Canadian operation now has 30 agents plus staff in Toronto. Across the country, it has 80 agents plus staff dealing in mixed-use, land, retail, office and multi-family transactions.

After graduating from university, Paterson created a real estate software company which developed a mapping system to direct companies and organizations on where they should open their next locations. Mapfusion, Inc.’s clients included the United States military, McDonald’s and Walmart.

Paterson said Marcus & Millichap is the only brokerage firm in Canada exclusively involved in real estate investment sales, generally in the price range of between $1 million and $20 million.

“We’re buying and selling commercial real estate, period, in Canada. Our tools, our training and everything is really specialized.”

The private market client base in Canada is quite fragmented, according to Paterson, which he says works to Marcus & Millichap’s advantage.

“With all the tools that we have in place — with our training, history, processes, platform and foundation — it’s ours to take. Nobody else is in a better position than us.”

Another factor which differentiates Marcus & Millichap from its competitors is that every deal it’s involved in is mandated to be shared with not only the team in the local office but with the entire firm on a North American basis through a transparent operational platform it created.

“It allows us to do a lot more trades and allows us to facilitate the client a lot better,” said Paterson. “We don’t separate Canada and the U.S. We are truly one company. When you hire Marcus & Millichap, you really are hiring the entire firm.”

Most of Marcus & Millichap’s deals are traded behind the scenes, something Paterson says its clients appreciate.

“We pride ourselves on being ale to create a competitive market and get unbelievable exposure, yet not make it a public listing.”

Institutional Property Advisors (IPA), a division of Marcus & Millichap, has also made recent inroads in Canada with six employees involved with transactions across the country. Paterson said it’s focused on working with real estate investment trusts as well as tier one institutional clients and individuals on deals worth more than $20 million.

IPA is currently specializing in the retail and multi-family sectors in Canada.

The company is also raising its profile through being actively involved with charitable organizations and sponsoring major events across the nation, including the recent Formula 1 Grand Prix du Canada auto race in Montreal, according to Paterson.