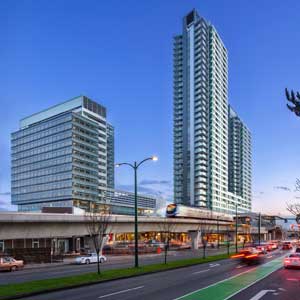 “Marine Gateway is a dense project that’s right on the transit station,” said Andrew Grant, president of developer PCI Developments Corp. “It’s more of a model that you might see in Europe or Asia, particularly Hong Kong.”

The one-block site at the southeast corner of SW Marine Drive and Cambie Street is now home to 461 market condominiums and rental apartments, a 14-storey office tower that should employ more than 1,600 once filled close to capacity, and 27 retail spaces that will create approximately 650 jobs. That’s a far cry from the 60 who used to work on the site when it was an Insurance Corporation of British Columbia depot.

PCI purchased the property overlooking the Fraser River in 2007 with the knowledge it would be the location of the Marine Drive transit stop on the Canada Line which was still under construction at the time. The site remained empty for a few years while the developer and the City of Vancouver figured out its best use. Once that was finally decided and construction was underway, it took 38 months to complete the more than $400-million project.

“The area was filled with a lot of post-war, single-family housing and a collection of industrial/commercial buildings between Marine Drive and the river that were kind of an evolution from historic river-oriented industrial uses,” said Grant.

“But by the time we acquired the site, and continuing through to today, the area was very underutilized with outmoded buildings as most of the expanding and vibrant businesses that might have been located there are either out in the suburbs now in much different looking facilities or their industries have gone overseas.”

“We’ve tried to make the high street a very active village-like main street that you’d see in communities everywhere,” said Grant. “But in this case it’s all drawn around the transit station.”

Marine Gateway became one of the fastest selling condo projects in Vancouver’s history when it went on sale four years ago. Half of the buyers came from within seven postal codes in and around the site, and 45 per cent were under 40.

Many of the 415 condo units that were purchased are being rented out, while 46 dedicated rental units included in Marine Gateway as part of a program with the City of Vancouver became available last fall. The majority are one-bedroom suites renting for about $1,500 a month, while there are also a few two- and three-bedroom units going for more. All of the condo and rental residences are occupied.

Westport, a clean technology company that engineers natural gas engines and vehicles, will occupy 46 per cent of Marine Gateway’s 250,000-square-foot office tower — which is only about half-leased now through Colliers International representatives. Grant expects occupancy levels to grow steadily and thinks that tenants now located in heavily car-reliant suburban office parks will be particularly interested in moving in.

“We’re pleased with our activity now that the project is pretty much finished and most of the retailers are open,” he said. “Office tenants are very interested in this package of convenience with retail, transit and the prospect of having their staff live so close to work.”

In addition to the Canada Line connection, Marine Gateway is also directly integrated into the South Vancouver Bus Loop that Grant said has 500 buses going in and out every day. It’s expected Marine Gateway will generate two million transit user trips a year.

Transit access was one of the factors in earning Marine Gateway a LEED Gold certification along with several environmentally friendly innovations, including: a district energy system that uses more than 300 geothermal wells drilled on site to provide heat; an ambient loop that takes excess heat from commercial users to heat water for residential units; a modern water preservation system; double-glazed windows; car-sharing; and bicycle storage.

Vancouver-based PCI has acquired and developed more than seven million square feet of real estate since 1982 and is involved with mixed-use, retail, office, residential and industrial projects.