A hole will soon be filled in the heart of Winnipeg’s historic Exchange District. The neighbourho... 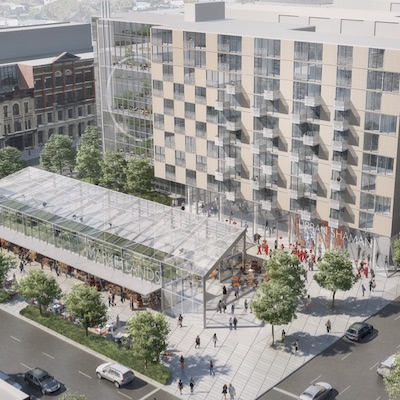 A hole will soon be filled in the heart of Winnipeg’s historic Exchange District.

The neighbourhood of heritage warehouses and brick office buildings just north of Portage Avenue in downtown Winnipeg is renowned for character architecture from the late 19th and early 20th centuries. But one property has been a sore thumb in recent years: a patch of land where the old Public Safety Building and an adjacent parkade reside.

The former headquarters for the Winnipeg Police Service and the parkade are slated to be demolished later this year. Taking their place will be the Market Lands, for which the winner of a design competition was announced late last year.

Since then the city’s publicly-funded, non-profit development agency CentreVenture Development Corporation, has been engaged in contract negotiations for the demolition of the existing buildings and construction of the new one. The winning bid for the build is expected to be announced in a few weeks.

“We really needed something that would fit a public purpose,” says Angela Mathieson, president and CEO of CentreVenture. “We could have put a park there, but that wouldn’t have been a good solution for an urban environment where there isn’t a high degree of density.”

The Market Lands is a publicly funded initiative that will be home to private businesses plus non-profits on the first two floors.

Originally owned by the city’s first postmaster in the 1800s, the land was donated to the city in 1875 provided it would always have a community-oriented role, Mathieson says. This project will continue that tradition.

“That caveat remains registered on the title of the property today,” she says.  “As such any development occurring on the southern portion has to have a public purpose.”

The Market Lands is indeed community-minded, featuring a residential high-rise with a mix of 100 low-income and market-based units. There will be 18,000 square feet on the main floor designated for a public market, as well as spaces for local artists and artisans.

That project, however, will only encompass the southern half of the site.

No decision on northern portion

The northern portion, also the larger at 300,000 square feet, is still a question mark for development, Mathieson says. It is designated for private development in the future.

Tom Janzen, a partner with the Winnipeg-based urban design and planning firm Scatliff+Miller+Murray, says the Market Lands is leveraging a tried-and-true approach for downtown redevelopment, in which public investment aims to encourage private investment.

“It’s really a strategic site that needs attention, and it’s challenged by the existing properties on the site as well as the historical caveat that affects development,” says Janzen, CentreVenture’s former development manager.  “That said, having public investment for downtown redevelopment is pretty commonplace across North America.”

The strategy stretches back decades in Winnipeg. In fact, the Public Safety Building was part of one of the first urban renewal initiatives in the city in the early ’60s, he adds.

“Maybe it wasn’t as successful as intended, but with the passage of time, there’s a better understanding of what works and what doesn’t, and this is the second shot at a major urban rehabilitation of the site.”

Montreal-based architecture firm Daoust Lestage’s winning design focuses on making the most of natural light with a south-facing glass-covered market area in the front of the building, while blending indoor and outdoor space. Mathieson says one reason the design was chosen is it fosters a connection for neighbouring amenities: Red River College’s Notre Dame campus, Old Market Square (a public park), the Paterson GlobalFoods Institute (Red River’s culinary arts school) and city hall.

“If you think about the site today, the Public Safety Building basically obscures the connection between these locations.”

No official date has been set for construction. Mathieson said more details regarding potential tenants and development for the northern portion of the land are expected in the coming months.

What is certain, she says, is the Market Lands will be a high-profile destination for the Exchange District — something the area currently lacks.

“When you tell someone to go to the Exchange, people aren’t sure where to go exactly,” because the area encompasses several blocks.

Market Lands to be a “go-to spot”

The Market Lands will be that “go-to spot” from which to explore the area, she adds.

Similar to past public projects in the city like The Forks, the Market Lands will serve as a gathering spot and a hub for arts and culture, drawing Winnipeggers and tourists to the neighbourhood, she says.

But just as critical is Market Lands’ residential component.

“Research shows the best way to create a safe and healthy urban environment is to have people living and working there,” Mathieson says.