Markham is boasting on its web site that Markham offers an expanding business base, a motivated, highly educated workforce and an affluent, diverse population. Markham claims that it is Canada’s high-tech capital and that by every measure, is thriving. 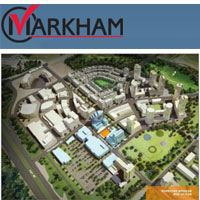 The City of Markham is the largest of nine communities in York Region, with a population of over 349,000 and a land area of 212 square kilometres. There are more than 400 Canadian head offices of the 10,200 companies in Markham, including IBM, Aviva Insurance, AMD, Bank of China, GE Digital Energy, Honeywell, Huawei Technologies, Lenovo, Johnson & Johnson, Toshiba, Honda and Hyundai. Over 1,000 technology and life sciences companies are based in Markham. These two sectors alone employ 37,000 people – over one-fifth of the total workforce of 162,000.

All this economic activity requires real estate and the Markham web site has identified six major new redevelopment. The following list provides a quick synopsis of these projects.

Buttonville Airport is located at 2833 16th Ave (at Woodbine Avenue) and it is one of the prime locations for development in the GTA with 170 acres of vacant land within the urban boundary.

The Buttonville plan will be partially available in Phase One, in 2016 and it will transform the area into a thriving employment destination designed to attract business, investment and talent. A well-defined neighbourhood centre will serve as the heart of the community, where people can meet their daily needs on foot and where mobility and interaction are encouraged.

Downtown Markham is the central business district of Markham located within Markham Centre and Unionville at 169-179 and 170-180 Enterprise Blvd (Birchmount Rd and Hwy 407).

This 11.47 acres mixed use project is located at 9390 Woodbine Ave (north-west of Woodbine Ave & 16th Ave) and is being developed by King Square Ltd, a real estate developer in Ontario

Phase 2 includes 19-storey high buildings consisting of 650 hotel-style dwelling units with a total gross area of about 530,000 square feet and the Crowne Plaza Hotel, a 150 room 4-star hotel with 20,000 square feet of office space and 50,000 square feet of retail space. The hotel will be accessible to the facilities of Phase 1 by an enclosed skywalk corridor connected to the large King Square Phase 1 indoor mall. 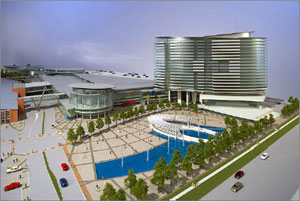 Remington Centre is an 800,000 square feet Chinese-themed mall with impressive retail experience to be built on the site of the present Market Village mall located at the intersection of Steeles Avenue and Kennedy Road in Downtown Markham. The centre will be connected to Pacific Mall by an indoor walkway.

The mall will feature a six-acre outdoor public plaza complete with a pond that converts into an ice rink. A permanent stage will accommodate more than 2,000

people for weekly cultural performances in centre court. The Remington Centre will also include an adjoining 20-storey, 475,000 square feet condo/hotel tower that will be constructed in the second phase.

The demolition of Market Village and construction of the new mall was scheduled for the third quarter of 2013 but, as of early 2016, Market Village remains in operation with no signs of closure. However, some long term tenants have left including McDonalds in late 2015.

Located at 9999 Hwy 48 (Major Mackenzie & Hwy 48), Villamark Crossing is a premiere Class A retail and office development. It is considered to be the retail “center ice” for the area. The property consists of 32 acres of land and has superior access being on the corner of Markham Road and Hwy 48 with multiple signalled entrances. The area is characterized by tremendous residential, commercial, and regional infrastructure growth and developments, and has attracted the interest of several new US retail tenants. The property is located within blocks of the local GO train station.

The 30 acres site located at 1 Steelcase Road West (Woodbine Avenue one block north of Steeles Avenue) is occupied by a 719,018 square feet industrial building which has been vacant for several years. Recently a portion of the building was renovated and is used by Liberty Development Corporation as their head office.

The approved amendment to the City of Markham Official Plan provides for the development of a proposed mixed-use commercial/office complex of approximately 1,959,996 square feet consisting of office, hotel, restaurant and retail uses.

Development is proposed in phases. Phase 1 consists of a 16 storey office building, and a two storey retail building with underground and surface parking. Future phasing includes two additional office buildings (15 and 17 storeys), a 17 storey hotel and two free standing restaurants. Approximately 90% of the existing industrial/office building will be retained as part of the redevelopment.

This article is an excerpt from Petrus Commercial Realty Corp. newsletter the Real Estate Report (GTA) Volume 23.03 – Focus: Markham Office.  Recent office sales in Markham, Ontario can be found in this report on the Petrus Realty website.

Pierre Gagne, Broker of Record is the driving force behind the firm. He is a prominent and reputable industry veteran whose career started in 1980 with one of Canada's largest…

Pierre Gagne, Broker of Record is the driving force behind the firm. He is a prominent and reputable industry veteran whose career started in 1980 with one of Canada's largest…