Marlin Spring is a relative newcomer to the residential development scene, but its principals have impressive pedigrees and the recent groundbreaking for Toronto’s Canvas Condominium is just one project it has on the go. 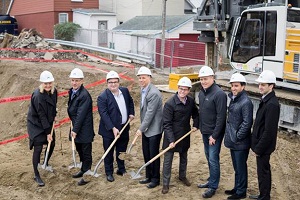 “When it comes to our projects, we want to make a good, everlasting impression on the purchasers and the neighbourhoods,” said Mandelbaum.

The Mack, Canvas and WestBeach

The first current Marlin Spring development to be completed will be The Mack, consisting of 206 townhouses on a 10-acre site near Major Mackenzie Drive and Highway 400 in Vaughan, Ont. The architect is RN Design, the interior designer U31 Inc. and the landscape architect NAK Design Group.

“The Mack is heading toward occupancy in March,” said Mandelbaum. “We have a few units left that we didn’t market.”

The official groundbreaking ceremony for Canvas took place on Nov. 15 at 2301-2315 Danforth Ave. in Toronto, a 285-foot wide assembly between the Woodbine and Main Street subway stations that will feature 170 units. It was designed by Graziani + Corazza Architects Inc., with U31 handling interiors and NAK overseeing the landscaping.

The eight-storey building will include a rooftop terrace, fitness centre and party lounge. It’s slated for occupancy in the summer of 2019.

“We’ve put together a really fabulous, cutting-edge, modern and fresh project located right on the Danforth,” said Mandelbaum. “It’s a community that’s gentrifying fast and growing fast and has tremendous retail and transit at its disposal.”

WestBeach Condominiums at 1624-1630 Queen St. E. in Toronto will feature 89 suites in another building designed by Graziani + Corazza Architects, with U31 responsible for interiors and NAK in charge of landscaping. The six-storey building on the site of former restaurants will have one level of underground parking, a rooftop terrace and a party room. It’s located directly north of Woodbine Park, Ashbridges Bay Park and Woodbine Beach.

“It has tremendous amenities at its doorstep,” said Mandelbaum. “You have an LCBO, a cinema, a park and transit right there. The units are larger and are more family-sized, so 900 to 1,000 square feet and larger. There’s been tremendous demand. It’s more of a boutique type of building.”

Mandelbaum added Marlin Spring is ready to break ground and is just looking for the right date after selling 85 per cent of the units within weeks of opening. He expects it to be completed within a few months of Canvas.

“Sales for these three particular projects well exceeded expectations,” said Mandelbaum. “It was amazing demand from the community and we’re really happy with all of it.”

There’s a lot more in the development pipeline in the Greater Toronto Area for Marlin Spring.

There are plans for an 11-storey mid-rise building at the corner of St. Clair Avenue and Symes Road in an area now known as The Stockyards — because of its former use.

This project will be developed in partnership with Greybrook Realty Partners and will feature approximately 260 units offering a mix of one-, two- and three-bedroom designs. It will have 5,000 square feet of retail at grade and is in close proximity to transit, shopping, entertainment and parks.

“It’s a really cool building and a fresh-looking building that integrates the heritage of the neighbourhood with its brick, masonry and design,” said Mandelbaum. “That particular junction of the city where The Stockyards is has so much to offer.”

Marlin Spring also has a one-acre, 10,000-square-foot site nearby at St. Clair and Mondovi Gate currently occupied by a Rexall pharmacy.

The company has a site at 1049 The Queensway, just west of Islington Avenue in Etobicoke, a neighbourhood Mandelbaum thinks is up-and-coming and has tremendous potential. Further down the road timing-wise, and to the south geographically, it’s looking to develop a project around Lakeshore Avenue and Windermere Avenue.

Additional properties for future development a bit further out include:

* Pine Valley, a 7.5-acre site in Vaughan that will feature luxury townhomes;
* a site at the southeast corner of Leslie Street and 19th Avenue in Richmond Hill that will be occupied by more than 400 units, with a mix of traditional and contemporary luxury townhomes designed by Hunt Design Associates Inc. and developed in conjunction with Greybrook;
* and a 13-acre site at 250 Harmony Rd. S. in Oshawa that will offer 200 units.

The company’s purchase criteria includes: cities with a diversified and stable job market; properties priced at a significant discount to replacement cost; value-add and repositioning opportunities; projects with a minimum of 100 units; and low vacancy rates.

The newest multi-family acquisition is Cottage Cove, a 24-acre parcel of land in Miami that has 468 one- and two-bedroom units and was purchased in July. It’s 97 per cent occupied and in an area poised for significant growth in the next five years.

There’s a lot more development in Marlin Spring’s future, and it wants to build its multi-family portfolio at the same time.

“We’ll work with investors to try to come up with something that meets their needs,” said Mandelbaum.

“We’re always well-funded and there’s been a lot of demand for our projects. We’re looking to continue to expand across North America. We have a lot of developments happening in Toronto and the GTA. We see a lot more multi-family acquisitions, primarily in U.S. Sunbelt and Midwestern states.”