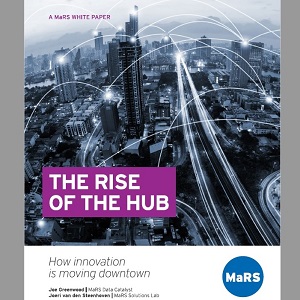 The question comes about after MaRS released a new report detailing how tech companies that once would have set up in research parks on the edges of cities are heading downtown.

MaRS finds it is moving core-ward because today’s breakthrough technologies come about in a clumping scenario as entrepreneurs need to collaborate with people working in diverse fields.

According to Joe Greenwood, co-author of the report Rise of the Hub: How Innovation Is Moving Downtown and executive lead for data at MaRS, the urban innovation hub is already having that effect on its immediate surroundings.

He predicts the success of MaRS in attracting life sciences and technology companies to its complex will result in a mini building boom in its immediate area. That would come about in large part because MaRS is bursting at the seams and has trouble taking on any new tenants.

Not just any real estate will suffice and much of the real estate around it is unsuitable for would-be tech hub residents.

“Here you are trying to design a space that is commercially viable and generates other benefits that enhance that activity. Because you want to attract different people, you want them to interact in different ways, you want other investors to follow you and build beside you.

“We expect that large areas around MaRS also get redeveloped. U of T is going to be redeveloping large swaths of the real estate around us because they are a big owner and because we are full and to attract other life sciences, high tech, AI-intensive type companies.”

Creating such an expending high-tech, innovation hub has to be intentional, Greenwood says, and notes MaRS is well on its way to accomplishing the feat.

“Taking MaRS as an example, now you have put this unique mix, a very dedicated space that is starting to attract a very different type of company to this part of the city,” Greenwood said. “What is the opportunity to start to regenerate other things adjacent to it?”

He expects the MaRS real estate effect to become apparent over the next five to 10 years.

The main premise of the MaRS report is that when innovation was largely confined to information technology it could be carried out on a city’s outskirts. Today, it spans several sectors and needs a network of support only available in a downtown environment.

That innovation is taking place in areas such as digital health, bio-informatics, financial technology (fintech) and the internet of things.

Researchers in all these fields need the facilities offered by universities and major hospitals; they need to mingle and interact with others doing work that complements their own; and they need people who can help to finance early stage work and, if ready to bring that work to the market.

“Most of all, they need diverse, international talent — the kind of people increasingly drawn to large cities around the world,” Greenwood said.

So where is it happening today? The logical places: Boston, Beijing, New York, London, Stockholm and San Francisco.

But it also occurring lso in Toronto, where the MaRS Discovery District has sprung to life. The trend is also visible in Montreal and Vancouver.

The MaRS report finds Canada’s three biggest cities — Toronto, Montreal and Vancouver — have the most potential to be innovative smart cities followed by Calgary, Edmonton and Ottawa. These cities are home to 40 per cent of Canada’s population and more than half of the GDP.

MaRS notes Brookings Institution’s Redefining Global Cities report classes Toronto in a group of “international middleweights,” a collection of mid-sized cities that includes Montreal and Vancouver as well as Melbourne and Sydney in Australia and Köln-Düsseldorf in Germany.

MaRS contends Toronto’s place in the international ranking “appears to be about right.” It’s a long way from the “global giants” like New York and London, but comparable to cities like Berlin and Madrid. Toronto has some important assets, and should aspire to be more than a “middleweight.”

Not only is its talent more diverse and youthful than that of many others, Toronto now ranks third in consultant PwC’s annual Cities of Opportunity report, behind London and Singapore, but ahead of Paris, Amsterdam and New York.

The report calls on government to nurture Toronto’s  innovation district, “ one of the strongest in the world.”

It includes more than seven million square feet of facilities “crammed into a handful of city blocks in the downtown, creating one of the highest concentrations of research institutions in the world.”

It includes the University of Toronto’s main campus, more than 30 medical and related research centres — including Princess Margaret Cancer Centre and the Hospital for Sick Children — as well as the MaRS Centre.

The report concludes: “Governments, corporations and research scientists alike recognize that to compete on the world stage, they must invest in these urban clusters of activity.”