Western Securities Limited has broken ground on Phase 1 of its million-square-foot Calgary UXBoro... 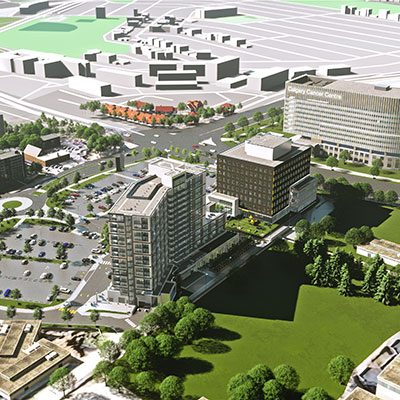 Western Securities Limited has broken ground on Phase 1 of its million-square-foot Calgary UXBorough mixed-use development, a project which has been in the works for over 15 years.

The first phase of the development, which is scheduled for occupancy in the first part of 2024, includes an eight-storey, 146,000-square-foot, state-of-the-art medical office building with a direct link to the Calgary Cancer Centre and Foothills Medical Centre via a pedestrian bridge.

The building’s main floor will house commercial tenants as well as a 10,000-square-foot daycare facility.

Mike Brescia is chief operating officer of Western Securities, which is owned by the O’Connor family. He said the revitalization of the former Stadium Shopping Centre site, which the family had built in 1960, has been planned for a long time.

“There was a DP (development permit) in 2006 that actually got turned down (by the) subdivision development appeal board and then we started revisiting it when I started with the company, which is over a decade ago now,” he said. “The current iteration has been in the works for about a decade.”

The location of the project project in a highly desirable northwest Calgary neighbourhood is key.

In addition to the vicinity of the Calgary Cancer Centre and the Foothills Medical Centre (Foothills Hospital), the site is also close to the University of Calgary, the massive mixed-use University District development, the Alberta Children’s Hospital and McMahon Stadium where the CFL’s Calgary Stampeders play.

“The name UXBorough really came from what we felt through the underlining premise for the project is that it’s at the crossroads of a lot of notable institutions in Calgary,” said Brescia.

“It’s really at the centre of what the city considers actually as a major activity centre.

“We’re just surrounded by large institutions, major employers, a tremendous amount of pedestrian activity because of a lot of people walking and cycling between all the different things going on in the neighbourhood.”

Brescia said future phases will include a hotel, another office building and another residential building. The buildings would also have retail on their main floors.

He said the 11-storey hotel will include 189 rooms and a conference centre, the 10-storey office building will be about 225,00 square feet and the four-storey residential building will have about 75 units with a grocery-store anchor at grade.

Residential units planned in future phases are also intended to be rentals, but that could change depending on the market conditions.

“Our intention is to try and begin construction on the next phase prior to completing this phase, but we’re just working on that part now on how to work through that,” said Brescia.

Brescia said the redevelopment will create more than one million estimated hours of labour for construction management, trade labour and suppliers.

A “good time” to break ground

“We really wanted to do something that was a very positive impact to the economy. We’ve had a bit of a down economy in Calgary for a few years and we want to contribute to the fabric of creating a ton of jobs and positive impact in an area where we thought we could do that,” said Brescia.

“Given its location, we felt it was a good time to do that. . . . There’s so much population both daytime from employment and the school. There’s a lot of synergy in the growth that’s happening between all of the different places.

“We consider ourselves an extension of the Foothills medical site. Previously (Stadium Shopping Centre) was just a strip centre but we’ve certainly had employees from there eating at the restaurants and shopping at the stores.

“It’s just a really integrated community. It’s kind of a city within a city all around there.”

The construction manager for the project is PCL Construction Management Inc., while the architect of record is Gibbs Gage Architects.

Western Securities Limited is a private, fully integrated real estate holding, management and development company. Its roots are in Calgary where the late John J. O’Connor incorporated the company in 1932.

Since 1977, Western Securities operations have diversified to include U.S. markets concentrated in Texas.

New focus for Strategic Group after 2 years of restructuring

Mario Toneguzzi Commercial Development National Feb. 17 2022
M
Mario Toneguzzi Business reporter
Mario Toneguzzi, based in Calgary has 37 years of experience as a daily newspaper writer, columnist and editor. He worked for 35 years at the Calgary Herald covering sports, crime, politics, health, city and breaking news, and business. For 12 years as a business writer, his main beats were commercial and residential real estate, retail, small business and general economic news. He nows works on his own as a freelance writer and consultant in communications and media relations/training.