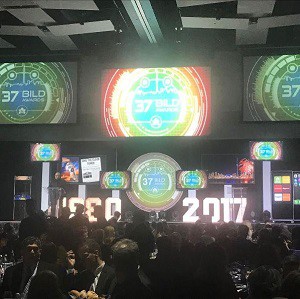 Winners were announced in a total of 51 categories. A group of 17 expert judges from across North America chose the winners from more than 900 entries.

Taking home the night’s most prestigious awards for Home Builders of the Year, were Mattamy Homes in the Low-Rise category and Tridel in the Mid/High-Rise category.

Another highlight of the evening was the presentation of BILD’s Lifetime Achievement Award to Al Libfeld, principal and co-founder of Tribute Communities. The company, based in Pickering, has built more than 30,000 homes across Southern Ontario.

In 2010, Tribute was honoured with the J.D. Power award for “Highest in Customer Satisfaction with New Home Builders in the Greater Toronto Area.” The company has earned numerous other honours over the years.

The Lifetime Achievement Award is the association’s highest honour and was presented to Libfeld for his contribution to the industry over the past four decades.

The People’s Choice Award, determined by members of the public through online voting, was awarded to Tridel for its Aquabella development. Aquabella is a resort destination on Toronto’s waterfront uniquely designed to follow the contours of the lake, boasting vast panoramas from its grand terraces.

“People’s Choice is a unique award because it is the public who decide the winner,” BILD president/CEO Bryan Tuckey said in a release announcing the awards.

“The projects that competed for this year’s title showcased the best in city building and demonstrated how the industry is providing a wide range of housing options for GTA home buyers.”

Aquabella also won the Mid/High-Rise Project of the Year honour, capping an impressive night for the builder.

Rockport Group won Best New Community (Planned/Under Development) for Weston Common. The development will create a vibrant community hub in Toronto’s Weston neighbourhood, an area that has not seen significant development in 40 years.

The Briarwood by Arista Homes took the award for Best Innovative Home Design, which recognizes cutting-edge design in low-rise homes that increase buying choices for entry-level consumers. The design features a forward-thinking combination of commercial and living space giving buyers the option to live and work from home.

Laurier Homes’ Kingswood, a 705-square-foot corner suite whose clever layout optimizes the use of internal space, won Best Innovative Suite Design. This award recognizes excellence in the design of a condo suite that increases options for first-time home buyers.

Project of the Year, Low-Rise title went to Geranium and the Pemberton Group for its Friday Harbour development on Lake Simcoe.

The award for Best Overall Marketing Campaign went to the team of CentreCourt Developments, LA Inc. and Brandon Communications for their campaign for Axis.

“Congratulations to all the winners on their tremendous achievements,” Tuckey said. “I’m proud to see so many quality projects coming to the market despite the increasing challenges builders and developers are facing.”

For a complete list of award recipients, visit http://www.bildawards.com.