Medallion Corp. has a Vision for downtown Ajax

Medallion Corp. is building out a Vision for the Town of Ajax.

The Toronto-based developer recently held a “topping off” ceremony for the first of two mixed-use Vision Towers which will soon stand at the corner of Harwood and Bayly streets in the growing municipality just east of Toronto. 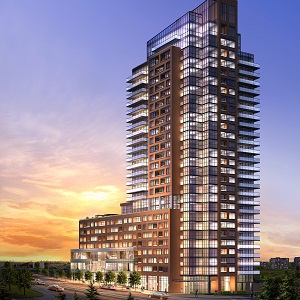 Medallion Corp. held a “topping off” ceremony for the first of its two Vision Towers in Ajax, a community east of Toronto.

The $300-million development includes two towers flanking what will be known as Pat Bayly Square (named after the town’s first mayor). Also included in the project are a reflecting pool, fountains and community gathering areas.

“All hands are on deck,” said Medallion Project Manager Aaron Bleeman in an email. “We anticipate occupancy to be fall of 2017.”

Medallion is just wrapping up foundation work on the second tower.

When complete, the Vision Towers will include 2,840 square meters of office space and 580 residential units. Retail space will be positioned around the square and along Bayly St.

Interestingly, the towers will offer one-, two- and three-bedroom rental units. Rental housing remains in short supply in the GTA, with Bleeman noting there is “strong demand” in Ajax and surrounding Durham Region.

The overall residential vacancy rate in the region is at just 1.7%, he said.

Among the amenities available to Vision residents are a theatre room, fitness area, games room, a private dining room for hosting get togethers and an outdoor rooftop terrace.

Following the mantra of “location, location, location” the Vision Tower site is just a block from the Hwy. 401 corridor – providing easy access to both the Greater Toronto Area and the recreational and travel opportunities to the east and north.

Parks, other amenities nearby

Commuter Go Train service parallels the highway, and the towers are walking distance from both the Ajax Waterfront Park along Lake Ontario and more parkland around Duffins Creek.

“Vision residents will have direct access to bike paths, public transportation, Hwy. 401 as well as having Lake Ontario and the Ajax community centre virtually in their back yard,” Bleeman said.

The Vision project is part of a larger effort to revitalize the downtown core of Ajax.

“Working with the Ajax Council has been a wonderful process right from the onset,” Bleeman said. “The town is not only an economic hub for the Durham region, but it also has the potential to be a vibrant and active urban core. At Medallion, the goal was to be a part of the transformation of downtown Ajax in a meaningful way.”

Bleeman calls Vision one of Medallion’s “most ambitious projects”. But, it’s not the only development the company has on the go in the GTA.

“We are currently developing a multi-phase project in Toronto at Finch and Weston,” he said,  “as well as (a) high-rise building in downtown Toronto, 561 Sherbourne.”